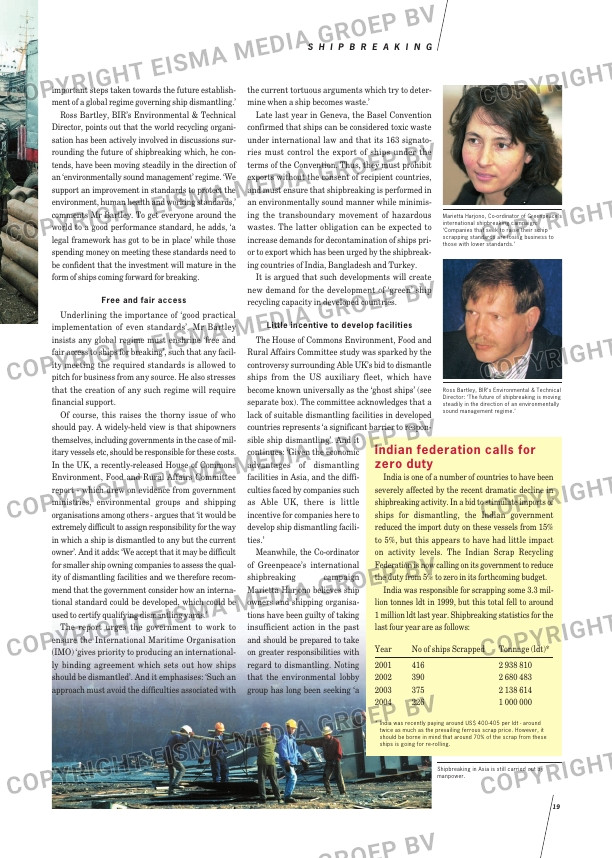 Ross Bartley, BIR’s Environmental & Technical
Director, points out that the world recycling organi-
sation has been actively involved in discussions sur-
rounding the future of shipbreaking which, he con-
tends, have been moving steadily in the direction of
an ‘environmentally sound management’ regime. ‘We
support an improvement in standards to protect the
environment, human health and working standards,’
comments Mr Bartley. To get everyone around the
world to a good performance standard, he adds, ‘a
legal framework has got to be in place’ while those
spending money on meeting these standards need to
be confident that the investment will mature in the
form of ships coming forward for breaking.

Underlining the importance of ‘good practical
implementation of even standards’, Mr Bartley
insists any global regime must enshrine ‘free and
fair access to ships for breaking’, such that any facil-
ity meeting the required standards is allowed to
pitch for business from any source. He also stresses
that the creation of any such regime will require
financial support.

Of course, this raises the thorny issue of who
should pay. A widely-held view is that shipowners
themselves, including governments in the case of mil-
itary vessels etc, should be responsible for these costs.
In the UK, a recently-released House of Commons
Environment, Food and Rural Affairs Committee
report – which drew on evidence from government
ministries, environmental groups and shipping
organisations among others – argues that ‘it would be
extremely difficult to assign responsibility for the way
in which a ship is dismantled to any but the current
owner’. And it adds: ‘We accept that it may be difficult
for smaller ship owning companies to assess the qual-
ity of dismantling facilities and we therefore recom-
mend that the government consider how an interna-
tional standard could be developed, which could be
used to certify qualifying dismantling yards.’

The report urges the government to work to
ensure the International Maritime Organisation
(IMO) ‘gives priority to producing an international-
ly binding agreement which sets out how ships
should be dismantled’. And it emphasises: ‘Such an
approach must avoid the difficulties associated with

the current tortuous arguments which try to deter-
mine when a ship becomes waste.’

Late last year in Geneva, the Basel Convention
confirmed that ships can be considered toxic waste
under international law and that its 163 signato-
ries must control the export of ships under the
terms of the Convention. Thus, they must prohibit
exports without the consent of recipient countries,
and must ensure that shipbreaking is performed in
an environmentally sound manner while minimis-
ing the transboundary movement of hazardous
wastes. The latter obligation can be expected to
increase demands for decontamination of ships pri-
or to export which has been urged by the shipbreak-
ing countries of India, Bangladesh and Turkey.

It is argued that such developments will create
new demand for the development of ‘green’ ship
recycling capacity in developed countries.

The House of Commons Environment, Food and
Rural Affairs Committee study was sparked by the
controversy surrounding Able UK’s bid to dismantle
ships from the US auxiliary fleet, which have
become known universally as the ‘ghost ships’ (see
separate box). The committee acknowledges that a
lack of suitable dismantling facilities in developed
countries represents ‘a significant barrier to respon-
sible ship dismantling’. And it
continues: ‘Given the economic
advantages of dismantling
facilities in Asia, and the diffi-
culties faced by companies such
as Able UK, there is little
incentive for companies here to
develop ship dismantling facili-
ties.’

Meanwhile, the Co-ordinator
of Greenpeace’s international
shipbreaking campaign
Marietta Harjono believes ship
owners and shipping organisa-
tions have been guilty of taking
insufficient action in the past
and should be prepared to take
on greater responsibilities with
regard to dismantling. Noting
that the environmental lobby
group has long been seeking ‘a

India is one of a number of countries to have been
severely affected by the recent dramatic decline in
shipbreaking activity. In a bid to stimulate imports of
ships for dismantling, the Indian government
reduced the import duty on these vessels from 15%
to 5%, but this appears to have had little impact
on activity levels. The Indian Scrap Recycling
Federation is now calling on its government to reduce
the duty from 5% to zero in its forthcoming budget.

India was responsible for scrapping some 3.3 mil-
lion tonnes ldt in 1999, but this total fell to around
1 million ldt last year. Shipbreaking statistics for the
last four year are as follows:

* India was recently paying around US$ 400-405 per ldt – around
twice as much as the prevailing ferrous scrap price. However, it
should be borne in mind that around 70% of the scrap from these
ships is going for re-rolling.

Shipbreaking in Asia is still carried out by
manpower.

Marietta Harjono, Co-ordinator of Greenpeace’s
international shipbreaking campaign:
‘Companies that seek to raise their schip
scrapping standards are losing business to
those with lower standards.’

Ross Bartley, BIR’s Environmental & Technical
Director: ‘The future of shipbreaking is moving
steadily in the direction of an environmentally
sound management regime.’