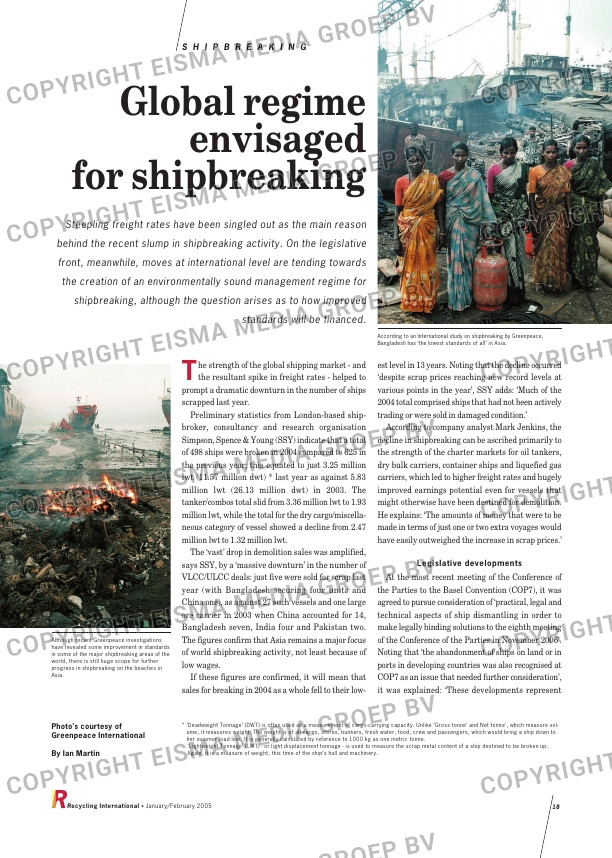 T he strength of the global shipping market – andthe resultant spike in freight rates – helped to
prompt a dramatic downturn in the number of ships
scrapped last year.

Preliminary statistics from London-based ship-
broker, consultancy and research organisation
Simpson, Spence & Young (SSY) indicate that a total
of 498 ships were broken in 2004 compared to 625 in
the previous year; this equated to just 3.25 million
lwt (11.57 million dwt) * last year as against 5.83
million lwt (26.13 million dwt) in 2003. The
tanker/combos total slid from 3.36 million lwt to 1.93
million lwt, while the total for the dry cargo/miscella-
neous category of vessel showed a decline from 2.47
million lwt to 1.32 million lwt.

The ‘vast’ drop in demolition sales was amplified,
says SSY, by a ‘massive downturn’ in the number of
VLCC/ULCC deals: just five were sold for scrap last
year (with Bangladesh securing four units and
China one), as against 27 such vessels and one large
ore carrier in 2003 when China accounted for 14,
Bangladesh seven, India four and Pakistan two.
The figures confirm that Asia remains a major focus
of world shipbreaking activity, not least because of
low wages.

If these figures are confirmed, it will mean that
sales for breaking in 2004 as a whole fell to their low-

est level in 13 years. Noting that the decline occurred
‘despite scrap prices reaching new record levels at
various points in the year’, SSY adds: ‘Much of the
2004 total comprised ships that had not been actively
trading or were sold in damaged condition.’

According to company analyst Mark Jenkins, the
decline in shipbreaking can be ascribed primarily to
the strength of the charter markets for oil tankers,
dry bulk carriers, container ships and liquefied gas
carriers, which led to higher freight rates and hugely
improved earnings potential even for vessels that
might otherwise have been destined for demolition.
He explains: ‘The amounts of money that were to be
made in terms of just one or two extra voyages would
have easily outweighed the increase in scrap prices.’

At the most recent meeting of the Conference of
the Parties to the Basel Convention (COP7), it was
agreed to pursue consideration of ‘practical, legal and
technical aspects of ship dismantling in order to
make legally binding solutions to the eighth meeting
of the Conference of the Parties in November 2006’.
Noting that ‘the abandonment of ships on land or in
ports in developing countries was also recognised at
COP7 as an issue that needed further consideration’,
it was explained: ‘These developments represent

* ‘Deadweight Tonnage’ (DWT) is often used as a measurement of cargo-carrying capacity. Unlike ‘Gross tonne’ and Net tonne’, which measure vol-
ume, it measures weight. The weight is of all cargo, stores, bunkers, fresh water, food, crew and passengers, which would bring a ship down to
her summer load line. It is generally calculated by reference to 1000 kg as one metric tonne.
‘Lightweight Tonnage’ (LWT) – or light displacement tonnage – is used to measure the scrap metal content of a ship destined to be broken up.
Again, it is a measure of weight, this time of the ship’s hull and machinery.

behind the recent slump in shipbreaking activity. On the legislative

front, meanwhile, moves at international level are tending towards

the creation of an environmentally sound management regime for

shipbreaking, although the question arises as to how improved

standards will be financed.
According to an International study on shipbreaking by Greenpeace,
Bangladesh has ‘the lowest standards of all’ in Asia.

Although recent Greenpeace investigations
have revealed some improvement in standards
in some of the major shipbreaking areas of the
world, there is still huge scope for further
progress in shipbreaking on the beaches in
Asia.