Subscribe
PET bottle recy- cling rate falls again in the USA The US recycling rate for PET bottles slipped to 19.6% in 2003 to mark the eighth straight year of de- clines in PET recycling, according to the National Association for PET Container Reso...
Read the entire page 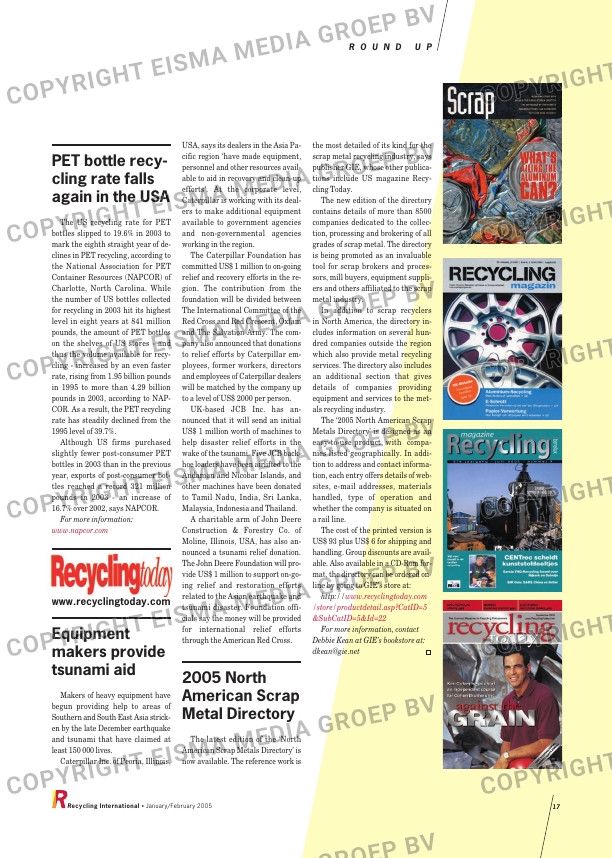 The US recycling rate for PET
bottles slipped to 19.6% in 2003 to
mark the eighth straight year of de-
clines in PET recycling, according to
the National Association for PET
Container Resources (NAPCOR) of
Charlotte, North Carolina. While
the number of US bottles collected
for recycling in 2003 hit its highest
level in eight years at 841 million
pounds, the amount of PET bottles
on the shelves of US stores – and
thus the volume available for recy-
cling – increased by an even faster
rate, rising from 1.95 billion pounds
in 1995 to more than 4.29 billion
pounds in 2003, according to NAP-
COR. As a result, the PET recycling
rate has steadily declined from the
1995 level of 39.7%.

Although US firms purchased
slightly fewer post-consumer PET
bottles in 2003 than in the previous
year, exports of post-consumer bot-
tles reached a record 321 million
pounds in 2003 – an increase of
16.7% over 2002, says NAPCOR.

Makers of heavy equipment have
begun providing help to areas of
Southern and South East Asia strick-
en by the late December earthquake
and tsunami that have claimed at
least 150 000 lives.

USA, says its dealers in the Asia Pa-
cific region ‘have made equipment,
personnel and other resources avail-
able to aid in recovery and clean-up
efforts’. At the corporate level,
Caterpillar is working with its deal-
ers to make additional equipment
available to government agencies
and non-governmental agencies
working in the region.

The Caterpillar Foundation has
committed US$ 1 million to on-going
relief and recovery efforts in the re-
gion. The contribution from the
foundation will be divided between
The International Committee of the
Red Cross and Red Crescent, Oxfam
and The Salvation Army. The com-
pany also announced that donations
to relief efforts by Caterpillar em-
ployees, former workers, directors
and employees of Caterpillar dealers
will be matched by the company up
to a level of US$ 2000 per person.

UK-based JCB Inc. has an-
nounced that it will send an initial
US$ 1 million worth of machines to
help disaster relief efforts in the
wake of the tsunami. Five JCB back-
hoe loaders have been airlifted to the
Andaman and Nicobar Islands, and
other machines have been donated
to Tamil Nadu, India, Sri Lanka,
Malaysia, Indonesia and Thailand.

A charitable arm of John Deere
Construction & Forestry Co. of
Moline, Illinois, USA, has also an-
nounced a tsunami relief donation.
The John Deere Foundation will pro-
vide US$ 1 million to support on-go-
ing relief and restoration efforts
related to the Asian earthquake and
tsunami disaster. Foundation offi-
cials say the money will be provided
for international relief efforts
through the American Red Cross.

The latest edition of the ‘North
American Scrap Metals Directory’ is
now available. The reference work is

the most detailed of its kind for the
scrap metal recycling industry, says
publisher GIE, whose other publica-
tions include US magazine Recy-
cling Today.

The new edition of the directory
contains details of more than 8500
companies dedicated to the collec-
tion, processing and brokering of all
grades of scrap metal. The directory
is being promoted as an invaluable
tool for scrap brokers and proces-
sors, mill buyers, equipment suppli-
ers and others affiliated to the scrap
metal industry.

In addition to scrap recyclers
in North America, the directory in-
cludes information on several hun-
dred companies outside the region
which also provide metal recycling
services. The directory also includes
an additional section that gives
details of companies providing
equipment and services to the met-
als recycling industry.

The ‘2005 North American Scrap
Metals Directory’ is designed as an
easy-to-use product, with compa-
nies listed geographically. In addi-
tion to address and contact informa-
tion, each entry offers details of web-
sites, e-mail addresses, materials
handled, type of operation and
whether the company is situated on
a rail line.

The cost of the printed version is
US$ 93 plus US$ 6 for shipping and
handling. Group discounts are avail-
able. Also available in a CD-Rom for-
mat, the directory can be ordered on-
line by going to GIE’s store at: