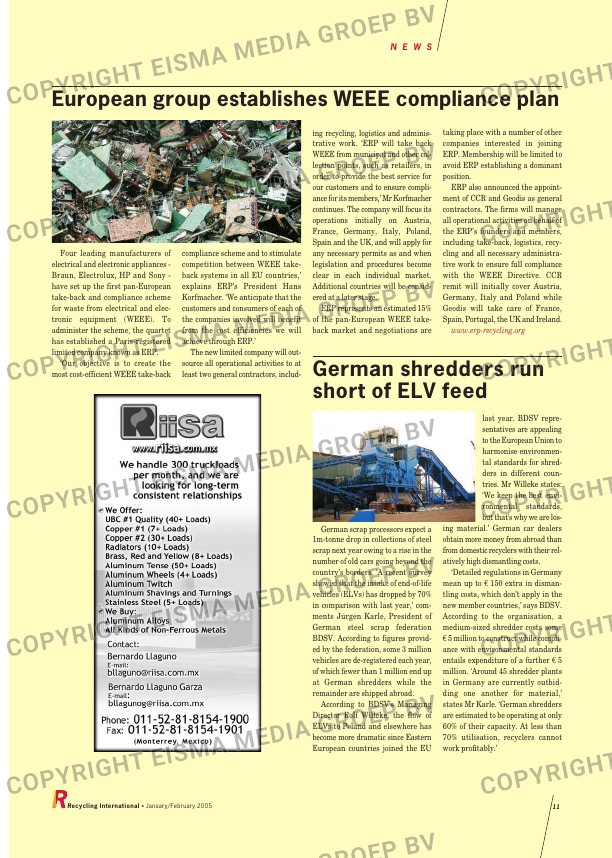 ing recycling, logistics and adminis-
trative work. ‘ERP will take back
WEEE from municipal and other col-
lection points, such as retailers, in
order to provide the best service for
our customers and to ensure compli-
ance for its members,’ Mr Korfmacher
continues. The company will focus its
operations initially on Austria,
France, Germany, Italy, Poland,
Spain and the UK, and will apply for
any necessary permits as and when
legislation and procedures become
clear in each individual market.
Additional countries will be consid-
ered at a later stage.

taking place with a number of other
companies interested in joining
ERP. Membership will be limited to
avoid ERP establishing a dominant
position.

ERP also announced the appoint-
ment of CCR and Geodis as general
contractors. The firms will manage
all operational activities on behalf of
the ERP’s founders and members,
including take-back, logistics, recy-
cling and all necessary administra-
tive work to ensure full compliance
with the WEEE Directive. CCR
remit will initially cover Austria,
Germany, Italy and Poland while
Geodis will take care of France,
Spain, Portugal, the UK and Ireland.

Four leading manufacturers of
electrical and electronic appliances –
Braun, Electrolux, HP and Sony –
have set up the first pan-European
take-back and compliance scheme
for waste from electrical and elec-
tronic equipment (WEEE). To
administer the scheme, the quartet
has established a Paris-registered
limited company known as ERP.

compliance scheme and to stimulate
competition between WEEE take-
back systems in all EU countries,’
explains ERP’s President Hans
Korfmacher. ‘We anticipate that the
customers and consumers of each of
the companies involved will benefit
from the cost efficiencies we will
achieve through ERP.’

The new limited company will out-
source all operational activities to at
least two general contractors, includ-

German scrap processors expect a
1m-tonne drop in collections of steel
scrap next year owing to a rise in the
number of old cars going beyond the
country’s borders. ‘A recent survey
showed that the intake of end-of-life
vehicles (ELVs) has dropped by 70%
in comparison with last year,’ com-
ments Jürgen Karle, President of
German steel scrap federation
BDSV. According to figures provid-
ed by the federation, some 3 million
vehicles are de-registered each year,
of which fewer than 1 million end up
at German shredders while the
remainder are shipped abroad.

According to BDSV’s Managing
Director Rolf Willeke, the flow of
ELVs to Poland and elsewhere has
become more dramatic since Eastern
European countries joined the EU

last year. BDSV repre-
sentatives are appealing
to the European Union to
harmonise environmen-
tal standards for shred-
ders in different coun-
tries. Mr Willeke states:
‘We keep the best envi-
ronmental standards,
but that’s why we are los-

‘Detailed regulations in Germany
mean up to € 150 extra in disman-
tling costs, which don’t apply in the
new member countries,’ says BDSV.
According to the organisation, a
medium-sized shredder costs some
€ 5 million to construct while compli-
ance with environmental standards
entails expenditure of a further € 5
million. ‘Around 45 shredder plants
in Germany are currently outbid-
ding one another for material,’
states Mr Karle. ‘German shredders
are estimated to be operating at only
60% of their capacity. At less than
70% utilisation, recyclers cannot
work profitably.’