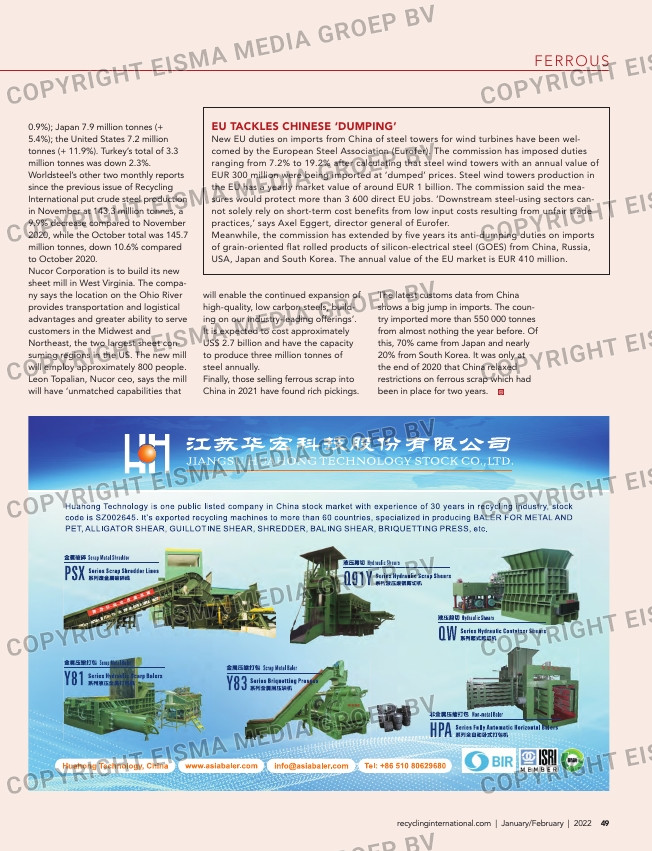 0.9%); Japan 7.9 million tonnes (+
5.4%); the United States 7.2 million
tonnes (+ 11.9%). Turkey’s total of 3.3
million tonnes was down 2.3%.
Worldsteel’s other two monthly reports
since the previous issue of Recycling
International put crude steel production
in November at 143.3 million tonnes, a
9.9% decrease compared to November
2020, while the October total was 145.7
million tonnes, down 10.6% compared
to October 2020.
Nucor Corporation is to build its new
sheet mill in West Virginia. The compa-
ny says the location on the Ohio River
provides transportation and logistical
advantages and greater ability to serve
customers in the Midwest and
Northeast, the two largest sheet con-
suming regions in the US. The new mill
will employ approximately 800 people.
Leon Topalian, Nucor ceo, says the mill
will have ‘unmatched capabilities that

will enable the continued expansion of
high-quality, low carbon steels, build-
ing on our industry-leading offerings’.
It is expected to cost approximately
US$ 2.7 billion and have the capacity
to produce three million tonnes of
steel annually.
Finally, those selling ferrous scrap into
China in 2021 have found rich pickings.

The latest customs data from China
shows a big jump in imports. The coun-
try imported more than 550 000 tonnes
from almost nothing the year before. Of
this, 70% came from Japan and nearly
20% from South Korea. It was only at
the end of 2020 that China relaxed
restrictions on ferrous scrap which had
been in place for two years.

EU TACKLES CHINESE ‘DUMPING’
New EU duties on imports from China of steel towers for wind turbines have been wel-
comed by the European Steel Association (Eurofer). The commission has imposed duties
ranging from 7.2% to 19.2% after calculating that steel wind towers with an annual value of
EUR 300 million were being imported at ‘dumped’ prices. Steel wind towers production in
the EU has a yearly market value of around EUR 1 billion. The commission said the mea-
sures would protect more than 3 600 direct EU jobs. ‘Downstream steel-using sectors can-
not solely rely on short-term cost benefits from low input costs resulting from unfair trade
practices,’ says Axel Eggert, director general of Eurofer.
Meanwhile, the commission has extended by five years its anti-dumping duties on imports
of grain-oriented flat rolled products of silicon-electrical steel (GOES) from China, Russia,
USA, Japan and South Korea. The annual value of the EU market is EUR 410 million.