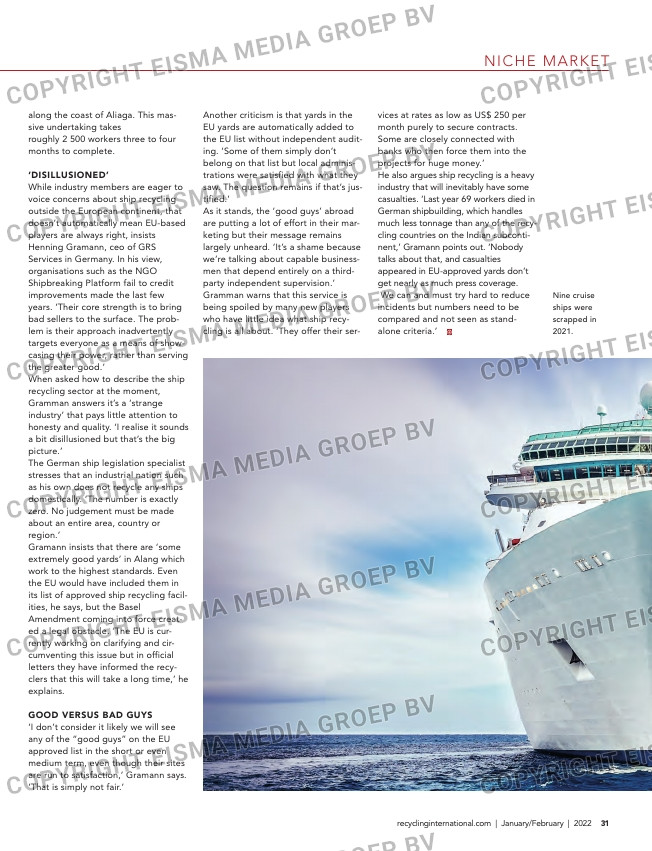 along the coast of Aliaga. This mas-
sive undertaking takes
roughly 2 500 workers three to four
months to complete.

‘DISILLUSIONED’
While industry members are eager to
voice concerns about ship recycling
outside the European continent, that
doesn’t automatically mean EU-based
players are always right, insists
Henning Gramann, ceo of GRS
Services in Germany. In his view,
organisations such as the NGO
Shipbreaking Platform fail to credit
improvements made the last few
years. ‘Their core strength is to bring
bad sellers to the surface. The prob-
lem is their approach inadvertently
targets everyone as a means of show-
casing their power, rather than serving
the greater good.’
When asked how to describe the ship
recycling sector at the moment,
Gramman answers it’s a ‘strange
industry’ that pays little attention to
honesty and quality. ‘I realise it sounds
a bit disillusioned but that’s the big
picture.’
The German ship legislation specialist
stresses that an industrial nation such
as his own does not recycle any ships
domestically. ‘The number is exactly
zero. No judgement must be made
about an entire area, country or
region.’
Gramann insists that there are ‘some
extremely good yards’ in Alang which
work to the highest standards. Even
the EU would have included them in
its list of approved ship recycling facil-
ities, he says, but the Basel
Amendment coming into force creat-
ed a legal obstacle. ‘The EU is cur-
rently working on clarifying and cir-
cumventing this issue but in official
letters they have informed the recy-
clers that this will take a long time,’ he
explains.

GOOD VERSUS BAD GUYS
‘I don’t consider it likely we will see
any of the “good guys” on the EU
approved list in the short or even
medium term, even though their sites
are run to satisfaction,’ Gramann says.
‘That is simply not fair.’

Another criticism is that yards in the
EU yards are automatically added to
the EU list without independent audit-
ing. ‘Some of them simply don’t
belong on that list but local adminis-
trations were satisfied with what they
saw. The question remains if that’s jus-
tified.’
As it stands, the ‘good guys’ abroad
are putting a lot of effort in their mar-
keting but their message remains
largely unheard. ‘It’s a shame because
we’re talking about capable business-
men that depend entirely on a third-
party independent supervision.’
Gramman warns that this service is
being spoiled by many new players
who have little idea what ship recy-
cling is all about. ‘They offer their ser-

vices at rates as low as US$ 250 per
month purely to secure contracts.
Some are closely connected with
banks who then force them into the
projects for huge money.’
He also argues ship recycling is a heavy
industry that will inevitably have some
casualties. ‘Last year 69 workers died in
German shipbuilding, which handles
much less tonnage than any of the recy-
cling countries on the Indian subconti-
nent,’ Gramann points out. ‘Nobody
talks about that, and casualties
appeared in EU-approved yards don’t
get nearly as much press coverage.
We can and must try hard to reduce
incidents but numbers need to be
compared and not seen as stand-
alone criteria.’

Nine cruise
ships were
scrapped in
2021.