Subscribe
EDITORIAL 3recyclinginternational.com | January/February | 2022 The American dream is ‘the belief that anyone, regardless of where they were born or what class they were born into, can attain their own version of success in a so...
Read the entire page 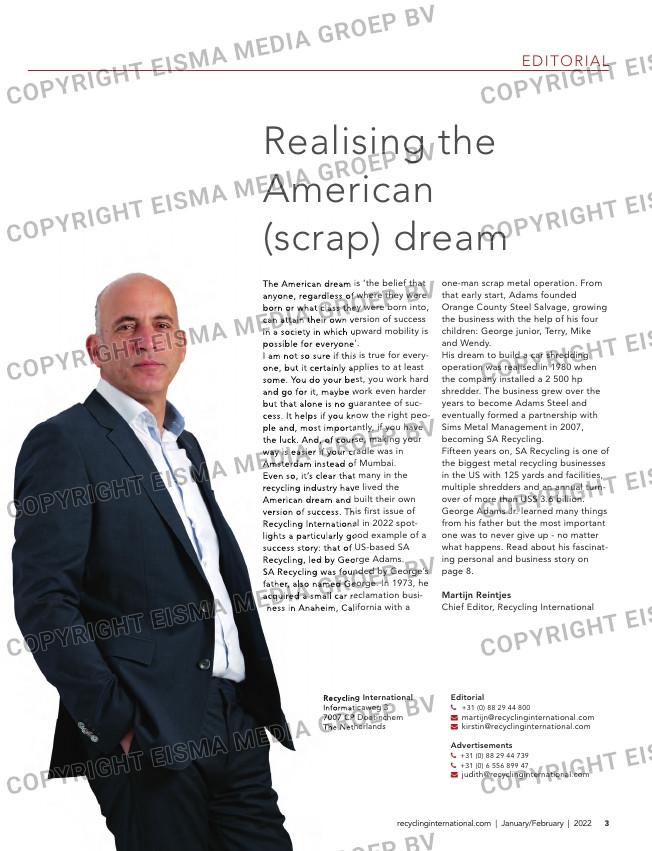 The American dream is ‘the belief that
anyone, regardless of where they were
born or what class they were born into,
can attain their own version of success
in a society in which upward mobility is
possible for everyone’.
I am not so sure if this is true for every-
one, but it certainly applies to at least
some. You do your best, you work hard
and go for it, maybe work even harder
but that alone is no guarantee of suc-
cess. It helps if you know the right peo-
ple and, most importantly, if you have
the luck. And, of course, making your
way is easier if your cradle was in
Amsterdam instead of Mumbai.
Even so, it’s clear that many in the
recycling industry have lived the
American dream and built their own
version of success. This first issue of
Recycling International in 2022 spot-
lights a particularly good example of a
success story: that of US-based SA
Recycling, led by George Adams.
SA Recycling was founded by George’s
father, also named George. In 1973, he
acquired a small car reclamation busi-
ness in Anaheim, California with a

one-man scrap metal operation. From
that early start, Adams founded
Orange County Steel Salvage, growing
the business with the help of his four
children: George junior, Terry, Mike
and Wendy.
His dream to build a car shredding
operation was realised in 1980 when
the company installed a 2 500 hp
shredder. The business grew over the
years to become Adams Steel and
eventually formed a partnership with
Sims Metal Management in 2007,
becoming SA Recycling.
Fifteen years on, SA Recycling is one of
the biggest metal recycling businesses
in the US with 125 yards and facilities,
multiple shredders and an annual turn-
over of more than US$ 3.6 billion.
George Adams Jr. learned many things
from his father but the most important
one was to never give up – no matter
what happens. Read about his fascinat-
ing personal and business story on
page 8.