Subscribe
E-SCRAP 21recyclinginternational.com | January/February | 2022 Serbia’s e-scrap front- runner looks to grow at home and abroad Every year, some 125 000 discarded fridges go through the shredder at E-Reciklaza, one of the largest ...
Read the entire page 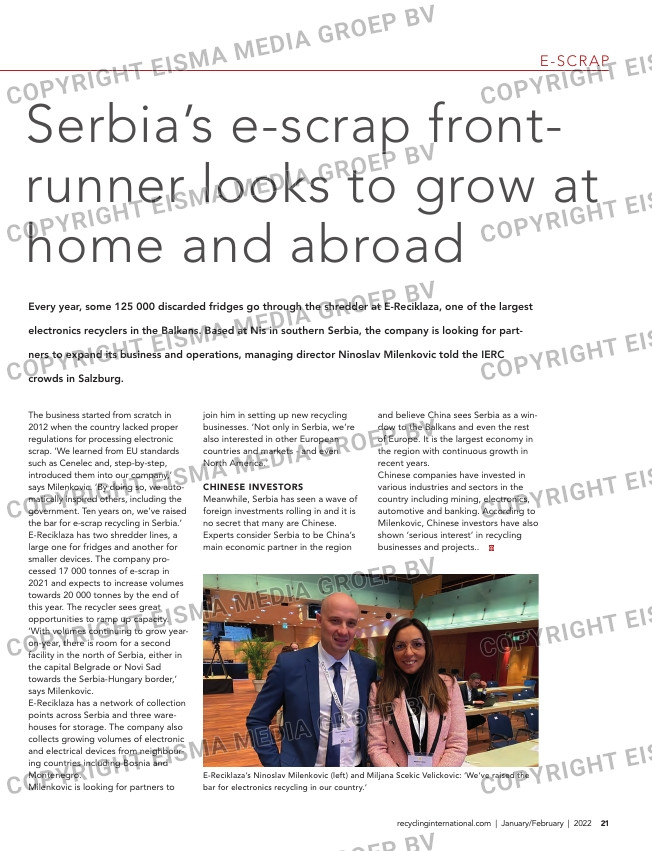 Serbia’s e-scrap front-
runner looks to grow at
home and abroad
Every year, some 125 000 discarded fridges go through the shredder at E-Reciklaza, one of the largest

electronics recyclers in the Balkans. Based at Nis in southern Serbia, the company is looking for part-

The business started from scratch in
2012 when the country lacked proper
regulations for processing electronic
scrap. ‘We learned from EU standards
such as Cenelec and, step-by-step,
introduced them into our company,’
says Milenkovic. ‘By doing so, we auto-
matically inspired others, including the
government. Ten years on, we’ve raised
the bar for e-scrap recycling in Serbia.’
E-Reciklaza has two shredder lines, a
large one for fridges and another for
smaller devices. The company pro-
cessed 17 000 tonnes of e-scrap in
2021 and expects to increase volumes
towards 20 000 tonnes by the end of
this year. The recycler sees great
opportunities to ramp up capacity.
‘With volumes continuing to grow year-
on-year, there is room for a second
facility in the north of Serbia, either in
the capital Belgrade or Novi Sad
towards the Serbia-Hungary border,’
says Milenkovic.
E-Reciklaza has a network of collection
points across Serbia and three ware-
houses for storage. The company also
collects growing volumes of electronic
and electrical devices from neighbour-
ing countries including Bosnia and
Montenegro.
Milenkovic is looking for partners to

join him in setting up new recycling
businesses. ‘Not only in Serbia, we’re
also interested in other European
countries and markets – and even
North America.’

CHINESE INVESTORS
Meanwhile, Serbia has seen a wave of
foreign investments rolling in and it is
no secret that many are Chinese.
Experts consider Serbia to be China’s
main economic partner in the region

A line for lithium batteries is being
built for a recycler in Atlanta, USA,
while two lines are going to customers
in Scandinavia and Poland. A facility
for fridges made by URT will also be
up and running in Romania by
November or December this year.
In 2020 URT installed a major lithium
battery recycling line for Volkswagen
in Salzgitter, Germany.

and believe China sees Serbia as a win-
dow to the Balkans and even the rest
of Europe. It is the largest economy in
the region with continuous growth in
recent years.
Chinese companies have invested in
various industries and sectors in the
country including mining, electronics,
automotive and banking. According to
Milenkovic, Chinese investors have also
shown ‘serious interest’ in recycling
businesses and projects..