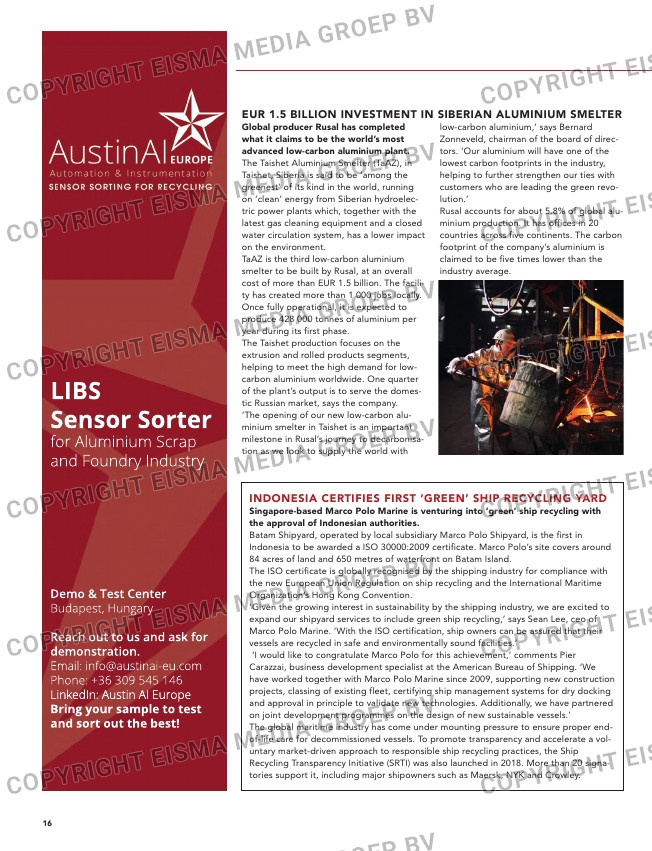 INDONESIA CERTIFIES FIRST ‘GREEN’ SHIP RECYCLING YARD
Singapore-based Marco Polo Marine is venturing into ‘green’ ship recycling with
the approval of Indonesian authorities.
Batam Shipyard, operated by local subsidiary Marco Polo Shipyard, is the first in
Indonesia to be awarded a ISO 30000:2009 certificate. Marco Polo’s site covers around
84 acres of land and 650 metres of waterfront on Batam Island.
The ISO certificate is globally recognised by the shipping industry for compliance with
the new European Union Regulation on ship recycling and the International Maritime
Organization’s Hong Kong Convention.
‘Given the growing interest in sustainability by the shipping industry, we are excited to
expand our shipyard services to include green ship recycling,’ says Sean Lee, ceo of
Marco Polo Marine. ‘With the ISO certification, ship owners can be assured that their
vessels are recycled in safe and environmentally sound facilities.’
‘I would like to congratulate Marco Polo for this achievement,’ comments Pier
Carazzai, business development specialist at the American Bureau of Shipping. ‘We
have worked together with Marco Polo Marine since 2009, supporting new construction
projects, classing of existing fleet, certifying ship management systems for dry docking
and approval in principle to validate new technologies. Additionally, we have partnered
on joint development programmes on the design of new sustainable vessels.’
The global maritime industry has come under mounting pressure to ensure proper end-
of-life care for decommissioned vessels. To promote transparency and accelerate a vol-
untary market-driven approach to responsible ship recycling practices, the Ship
Recycling Transparency Initiative (SRTI) was also launched in 2018. More than 20 signa-
tories support it, including major shipowners such as Maersk, NYK and Crowley.

EUR 1.5 BILLION INVESTMENT IN SIBERIAN ALUMINIUM SMELTER
Global producer Rusal has completed
what it claims to be the world’s most
advanced low-carbon aluminium plant.
The Taishet Aluminium Smelter (TaAZ), in
Taishet, Siberia is said to be ‘among the
greenest’ of its kind in the world, running
on ‘clean’ energy from Siberian hydroelec-
tric power plants which, together with the
latest gas cleaning equipment and a closed
water circulation system, has a lower impact
on the environment.
TaAZ is the third low-carbon aluminium
smelter to be built by Rusal, at an overall
cost of more than EUR 1.5 billion. The facili-
ty has created more than 1 000 jobs locally.
Once fully operational, it is expected to
produce 428 000 tonnes of aluminium per
year during its first phase.
The Taishet production focuses on the
extrusion and rolled products segments,
helping to meet the high demand for low-
carbon aluminium worldwide. One quarter
of the plant’s output is to serve the domes-
tic Russian market, says the company.
‘The opening of our new low-carbon alu-
minium smelter in Taishet is an important
milestone in Rusal’s journey to decarbonisa-
tion as we look to supply the world with

low-carbon aluminium,’ says Bernard
Zonneveld, chairman of the board of direc-
tors. ‘Our aluminium will have one of the
lowest carbon footprints in the industry,
helping to further strengthen our ties with
customers who are leading the green revo-
lution.’
Rusal accounts for about 5.8% of global alu-
minium production. It has offices in 20
countries across five continents. The carbon
footprint of the company’s aluminium is
claimed to be five times lower than the
industry average.

Reach out to us and ask for
demonstration.
Email: [email protected]
Phone: +36 309 545 146
LinkedIn: Austin AI Europe
Bring your sample to test
and sort out the best!