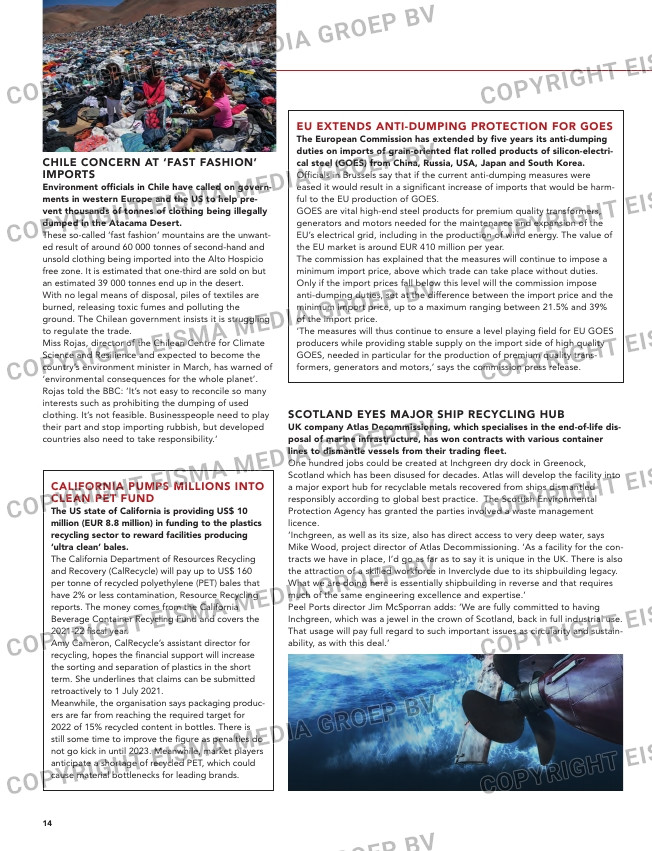 SCOTLAND EYES MAJOR SHIP RECYCLING HUB
UK company Atlas Decommissioning, which specialises in the end-of-life dis-
posal of marine infrastructure, has won contracts with various container
lines to dismantle vessels from their trading fleet.
One hundred jobs could be created at Inchgreen dry dock in Greenock,
Scotland which has been disused for decades. Atlas will develop the facility into
a major export hub for recyclable metals recovered from ships dismantled
responsibly according to global best practice. The Scottish Environmental
Protection Agency has granted the parties involved a waste management
licence.
‘Inchgreen, as well as its size, also has direct access to very deep water, says
Mike Wood, project director of Atlas Decommissioning. ‘As a facility for the con-
tracts we have in place, I’d go as far as to say it is unique in the UK. There is also
the attraction of a skilled workforce in Inverclyde due to its shipbuilding legacy.
What we are doing here is essentially shipbuilding in reverse and that requires
much of the same engineering excellence and expertise.’
Peel Ports director Jim McSporran adds: ‘We are fully committed to having
Inchgreen, which was a jewel in the crown of Scotland, back in full industrial use.
That usage will pay full regard to such important issues as circularity and sustain-
ability, as with this deal.’

CHILE CONCERN AT ‘FAST FASHION’
IMPORTS
Environment officials in Chile have called on govern-
ments in western Europe and the US to help pre-
vent thousands of tonnes of clothing being illegally
dumped in the Atacama Desert.
These so-called ‘fast fashion’ mountains are the unwant-
ed result of around 60 000 tonnes of second-hand and
unsold clothing being imported into the Alto Hospicio
free zone. It is estimated that one-third are sold on but
an estimated 39 000 tonnes end up in the desert.
With no legal means of disposal, piles of textiles are
burned, releasing toxic fumes and polluting the
ground. The Chilean government insists it is struggling
to regulate the trade.
Miss Rojas, director of the Chilean Centre for Climate
Science and Resilience and expected to become the
country’s environment minister in March, has warned of
‘environmental consequences for the whole planet’.
Rojas told the BBC: ‘It’s not easy to reconcile so many
interests such as prohibiting the dumping of used
clothing. It’s not feasible. Businesspeople need to play
their part and stop importing rubbish, but developed
countries also need to take responsibility.’ BATTERY METALS A MULTI-BILLION DOLLAR

URBAN MINE
The global lithium-ion battery recycling market is expected to
process 12 million tonnes of end-of-life batteries by 2042.
Research firm IDTechEx anticipates two ‘booming’ decades will
recover valuable metals worth US$ 51 billion (EUR 45 billion).
Owing to the growing popularity of electric cars, consumer elec-
tronics, energy storage systems and the overall advancements in
recycling technologies, industry stakeholders will witness 22%
growth during the forecast period 2022-2042, the research con-
cludes.
The new report provides an in-depth analysis of the current state
of the global Li-ion battery recycling market, including technology
and policy. ‘While there is a clear dominance in China, due to
establishing specific Li-ion battery management policy early-on,
Europe and North America are catching on,’ the analysts write.
Without an efficient battery collection network, a low volume of
batteries or the high cost of collection could damage the econom-
ics of recycling. Another challenge is said to be the lack of design
for recycling that make battery disassembly and sorting costly and
time-consuming.
While the sheer scale of EV batteries and easier collection provides
a huge opportunity, it is seen as coming with various technical and
economic challenges. Variety of design and the high voltage of EV
battery packs mean safe disassembly will remain a complex and
time-consuming stage.
Furthermore, the value per kWh embedded within EV batteries is
lower than consumer electronics batteries. This means recyclers
will have to extract more material at higher purities and efficiencies
for their recycling processes to be profitable.

EU EXTENDS ANTI-DUMPING PROTECTION FOR GOES
The European Commission has extended by five years its anti-dumping
duties on imports of grain-oriented flat rolled products of silicon-electri-
cal steel (GOES) from China, Russia, USA, Japan and South Korea.
Officials in Brussels say that if the current anti-dumping measures were
eased it would result in a significant increase of imports that would be harm-
ful to the EU production of GOES.
GOES are vital high-end steel products for premium quality transformers,
generators and motors needed for the maintenance and expansion of the
EU’s electrical grid, including in the production of wind energy. The value of
the EU market is around EUR 410 million per year.
The commission has explained that the measures will continue to impose a
minimum import price, above which trade can take place without duties.
Only if the import prices fall below this level will the commission impose
anti-dumping duties, set at the difference between the import price and the
minimum import price, up to a maximum ranging between 21.5% and 39%
of the import price.
‘The measures will thus continue to ensure a level playing field for EU GOES
producers while providing stable supply on the import side of high quality
GOES, needed in particular for the production of premium quality trans-
formers, generators and motors,’ says the commission press release.

CALIFORNIA PUMPS MILLIONS INTO
CLEAN PET FUND
The US state of California is providing US$ 10
million (EUR 8.8 million) in funding to the plastics
recycling sector to reward facilities producing
‘ultra clean’ bales.
The California Department of Resources Recycling
and Recovery (CalRecycle) will pay up to US$ 160
per tonne of recycled polyethylene (PET) bales that
have 2% or less contamination, Resource Recycling
reports. The money comes from the California
Beverage Container Recycling Fund and covers the
2021-22 fiscal year.
Amy Cameron, CalRecycle’s assistant director for
recycling, hopes the financial support will increase
the sorting and separation of plastics in the short
term. She underlines that claims can be submitted
retroactively to 1 July 2021.
Meanwhile, the organisation says packaging produc-
ers are far from reaching the required target for
2022 of 15% recycled content in bottles. There is
still some time to improve the figure as penalties do
not go kick in until 2023. Meanwhile, market players
anticipate a shortage of recycled PET, which could
cause material bottlenecks for leading brands.