Subscribe
TRENDS & UPDATES 13recyclinginternational.com | January/February | 2022 Fotobijschrift SCRAP DEALERS WORRY OVER RUSSIA-UKRAINE CRISIS The recycling industry has its own concerns over the tensions between Russia, US and other wes...
Read the entire page 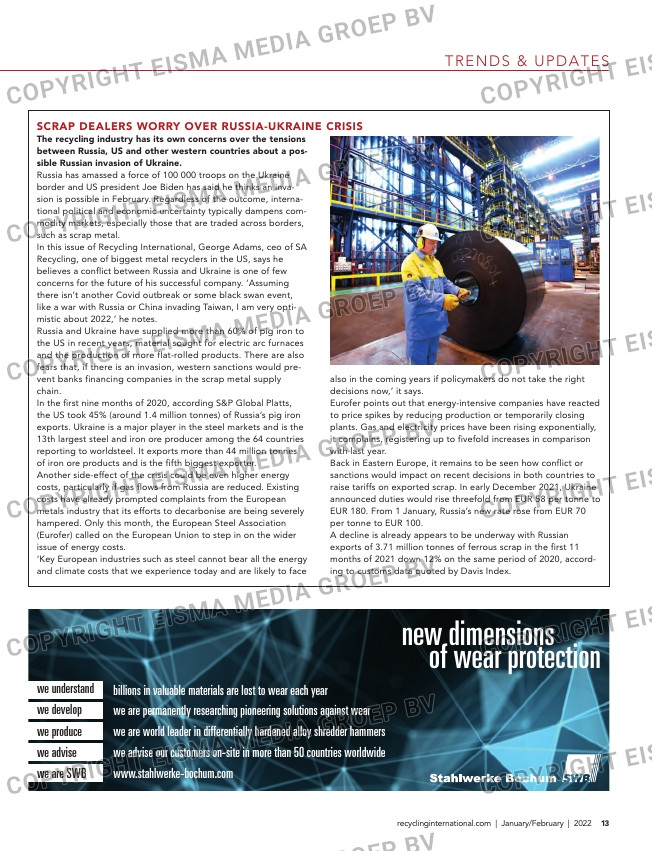 SCRAP DEALERS WORRY OVER RUSSIA-UKRAINE CRISIS
The recycling industry has its own concerns over the tensions
between Russia, US and other western countries about a pos-
sible Russian invasion of Ukraine.
Russia has amassed a force of 100 000 troops on the Ukraine
border and US president Joe Biden has said he thinks an inva-
sion is possible in February. Regardless of the outcome, interna-
tional political and economic uncertainty typically dampens com-
modity markets, especially those that are traded across borders,
such as scrap metal.
In this issue of Recycling International, George Adams, ceo of SA
Recycling, one of biggest metal recyclers in the US, says he
believes a conflict between Russia and Ukraine is one of few
concerns for the future of his successful company. ‘Assuming
there isn’t another Covid outbreak or some black swan event,
like a war with Russia or China invading Taiwan, I am very opti-
mistic about 2022,’ he notes.
Russia and Ukraine have supplied more than 60% of pig iron to
the US in recent years, material sought for electric arc furnaces
and the production of more flat-rolled products. There are also
fears that, if there is an invasion, western sanctions would pre-
vent banks financing companies in the scrap metal supply
chain.
In the first nine months of 2020, according S&P Global Platts,
the US took 45% (around 1.4 million tonnes) of Russia’s pig iron
exports. Ukraine is a major player in the steel markets and is the
13th largest steel and iron ore producer among the 64 countries
reporting to worldsteel. It exports more than 44 million tonnes
of iron ore products and is the fifth biggest exporter.
Another side-effect of the crisis could be even higher energy
costs, particularly if gas flows from Russia are reduced. Existing
costs have already prompted complaints from the European
metals industry that its efforts to decarbonise are being severely
hampered. Only this month, the European Steel Association
(Eurofer) called on the European Union to step in on the wider
issue of energy costs.
‘Key European industries such as steel cannot bear all the energy
and climate costs that we experience today and are likely to face

also in the coming years if policymakers do not take the right
decisions now,’ it says.
Eurofer points out that energy-intensive companies have reacted
to price spikes by reducing production or temporarily closing
plants. Gas and electricity prices have been rising exponentially,
it complains, registering up to fivefold increases in comparison
with last year.
Back in Eastern Europe, it remains to be seen how conflict or
sanctions would impact on recent decisions in both countries to
raise tariffs on exported scrap. In early December 2021, Ukraine
announced duties would rise threefold from EUR 58 per tonne to
EUR 180. From 1 January, Russia’s new rate rose from EUR 70
per tonne to EUR 100.
A decline is already appears to be underway with Russian
exports of 3.71 million tonnes of ferrous scrap in the first 11
months of 2021 down 12% on the same period of 2020, accord-
ing to customs data quoted by Davis Index.