Subscribe
12 Robin Wiener: ‘Lucky to have ended up in scrap!’ ‘One of the truths within the recycling industry is that recyclers are continuously innovating,’ says Robin Wiener, president of the Institute for Scrap Recycling Industries ...
Read the entire page 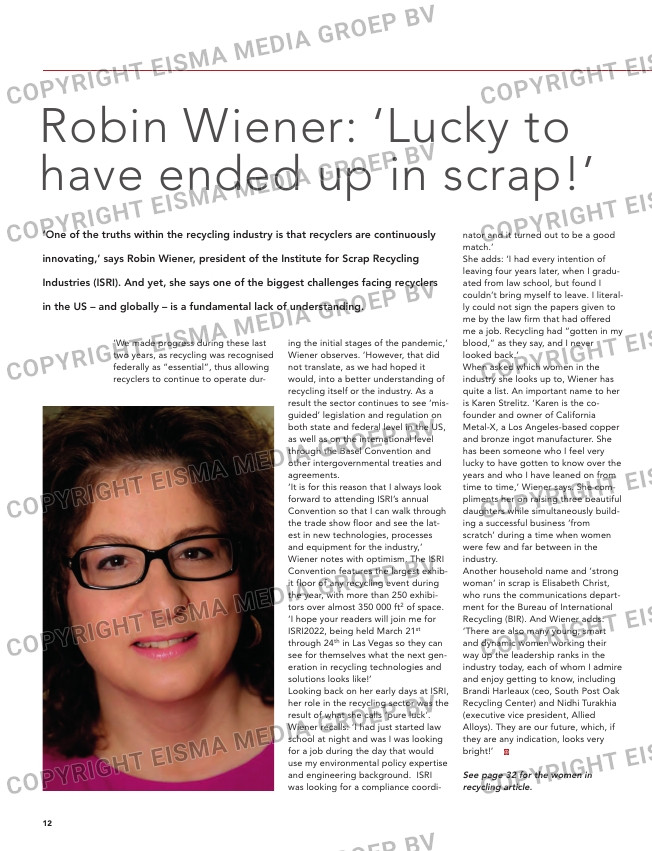 Robin Wiener: ‘Lucky to
have ended up in scrap!’
‘One of the truths within the recycling industry is that recyclers are continuously

Industries (ISRI). And yet, she says one of the biggest challenges facing recyclers

in the US – and globally – is a fundamental lack of understanding.

‘We made progress during these last
two years, as recycling was recognised
federally as “essential”, thus allowing
recyclers to continue to operate dur-

ing the initial stages of the pandemic,’
Wiener observes. ‘However, that did
not translate, as we had hoped it
would, into a better understanding of
recycling itself or the industry. As a
result the sector continues to see ‘mis-
guided’ legislation and regulation on
both state and federal level in the US,
as well as on the international level
through the Basel Convention and
other intergovernmental treaties and
agreements.
‘It is for this reason that I always look
forward to attending ISRI’s annual
Convention so that I can walk through
the trade show floor and see the lat-
est in new technologies, processes
and equipment for the industry,’
Wiener notes with optimism. The ISRI
Convention features the largest exhib-
it floor of any recycling event during
the year, with more than 250 exhibi-
tors over almost 350 000 ft2 of space.
‘I hope your readers will join me for
ISRI2022, being held March 21st
through 24th in Las Vegas so they can
see for themselves what the next gen-
eration in recycling technologies and
solutions looks like!’
Looking back on her early days at ISRI,
her role in the recycling sector was the
result of what she calls ‘pure luck’.
Wiener recalls: ‘I had just started law
school at night and was I was looking
for a job during the day that would
use my environmental policy expertise
and engineering background. ISRI
was looking for a compliance coordi-

nator and it turned out to be a good
match.’
She adds: ‘I had every intention of
leaving four years later, when I gradu-
ated from law school, but found I
couldn’t bring myself to leave. I literal-
ly could not sign the papers given to
me by the law firm that had offered
me a job. Recycling had “gotten in my
blood,” as they say, and I never
looked back.’
When asked which women in the
industry she looks up to, Wiener has
quite a list. An important name to her
is Karen Strelitz. ‘Karen is the co-
founder and owner of California
Metal-X, a Los Angeles-based copper
and bronze ingot manufacturer. She
has been someone who I feel very
lucky to have gotten to know over the
years and who I have leaned on from
time to time,’ Wiener says. She com-
pliments her on raising three beautiful
daughters while simultaneously build-
ing a successful business ‘from
scratch’ during a time when women
were few and far between in the
industry.
Another household name and ‘strong
woman’ in scrap is Elisabeth Christ,
who runs the communications depart-
ment for the Bureau of International
Recycling (BIR). And Wiener adds:
‘There are also many young, smart
and dynamic women working their
way up the leadership ranks in the
industry today, each of whom I admire
and enjoy getting to know, including
Brandi Harleaux (ceo, South Post Oak
Recycling Center) and Nidhi Turakhia
(executive vice president, Allied
Alloys). They are our future, which, if
they are any indication, looks very
bright!’

See page 32 for the women in
recycling article.

SCRAP DEALERS WORRY OVER RUSSIA-UKRAINE CRISIS
The recycling industry has its own concerns over the tensions
between Russia, US and other western countries about a pos-
sible Russian invasion of Ukraine.
Russia has amassed a force of 100 000 troops on the Ukraine
border and US president Joe Biden has said he thinks an inva-
sion is possible in February. Regardless of the outcome, interna-
tional political and economic uncertainty typically dampens com-
modity markets, especially those that are traded across borders,
such as scrap metal.
In this issue of Recycling International, George Adams, ceo of SA
Recycling, one of biggest metal recyclers in the US, says he
believes a conflict between Russia and Ukraine is one of few
concerns for the future of his successful company. ‘Assuming
there isn’t another Covid outbreak or some black swan event,
like a war with Russia or China invading Taiwan, I am very opti-
mistic about 2022,’ he notes.
Russia and Ukraine have supplied more than 60% of pig iron to
the US in recent years, material sought for electric arc furnaces
and the production of more flat-rolled products. There are also
fears that, if there is an invasion, western sanctions would pre-
vent banks financing companies in the scrap metal supply
chain.
In the first nine months of 2020, according S&P Global Platts,
the US took 45% (around 1.4 million tonnes) of Russia’s pig iron
exports. Ukraine is a major player in the steel markets and is the
13th largest steel and iron ore producer among the 64 countries
reporting to worldsteel. It exports more than 44 million tonnes
of iron ore products and is the fifth biggest exporter.
Another side-effect of the crisis could be even higher energy
costs, particularly if gas flows from Russia are reduced. Existing
costs have already prompted complaints from the European
metals industry that its efforts to decarbonise are being severely
hampered. Only this month, the European Steel Association
(Eurofer) called on the European Union to step in on the wider
issue of energy costs.
‘Key European industries such as steel cannot bear all the energy
and climate costs that we experience today and are likely to face