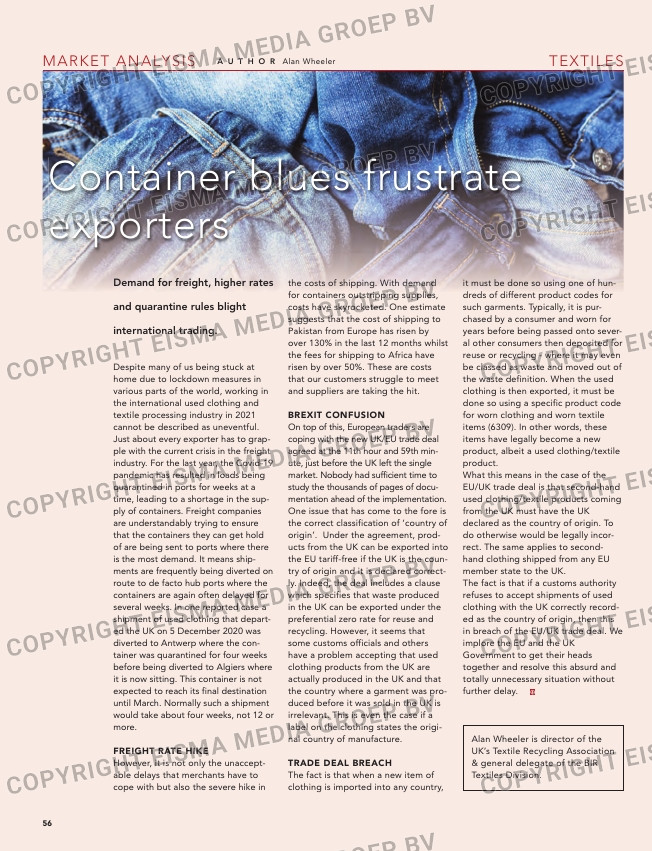 Despite many of us being stuck at
home due to lockdown measures in
various parts of the world, working in
the international used clothing and
textile processing industry in 2021
cannot be described as uneventful.
Just about every exporter has to grap-
ple with the current crisis in the freight
industry. For the last year, the Covid-19
pandemic has resulted in loads being
quarantined in ports for weeks at a
time, leading to a shortage in the sup-
ply of containers. Freight companies
are understandably trying to ensure
that the containers they can get hold
of are being sent to ports where there
is the most demand. It means ship-
ments are frequently being diverted on
route to de facto hub ports where the
containers are again often delayed for
several weeks. In one reported case a
shipment of used clothing that depart-
ed the UK on 5 December 2020 was
diverted to Antwerp where the con-
tainer was quarantined for four weeks
before being diverted to Algiers where
it is now sitting. This container is not
expected to reach its final destination
until March. Normally such a shipment
would take about four weeks, not 12 or
more.

FREIGHT RATE HIKE
However, it is not only the unaccept-
able delays that merchants have to
cope with but also the severe hike in

the costs of shipping. With demand
for containers outstripping supplies,
costs have skyrocketed. One estimate
suggests that the cost of shipping to
Pakistan from Europe has risen by
over 130% in the last 12 months whilst
the fees for shipping to Africa have
risen by over 50%. These are costs
that our customers struggle to meet
and suppliers are taking the hit.

BREXIT CONFUSION
On top of this, European traders are
coping with the new UK/EU trade deal
agreed at the 11th hour and 59th min-
ute, just before the UK left the single
market. Nobody had sufficient time to
study the thousands of pages of docu-
mentation ahead of the implementation.
One issue that has come to the fore is
the correct classification of ‘country of
origin’. Under the agreement, prod-
ucts from the UK can be exported into
the EU tariff-free if the UK is the coun-
try of origin and it is declared correct-
ly. Indeed, the deal includes a clause
which specifies that waste produced
in the UK can be exported under the
preferential zero rate for reuse and
recycling. However, it seems that
some customs officials and others
have a problem accepting that used
clothing products from the UK are
actually produced in the UK and that
the country where a garment was pro-
duced before it was sold in the UK is
irrelevant. This is even the case if a
label on the clothing states the origi-
nal country of manufacture.

TRADE DEAL BREACH
The fact is that when a new item of
clothing is imported into any country,

it must be done so using one of hun-
dreds of different product codes for
such garments. Typically, it is pur-
chased by a consumer and worn for
years before being passed onto sever-
al other consumers then deposited for
reuse or recycling – where it may even
be classed as waste and moved out of
the waste definition. When the used
clothing is then exported, it must be
done so using a specific product code
for worn clothing and worn textile
items (6309). In other words, these
items have legally become a new
product, albeit a used clothing/textile
product.
What this means in the case of the
EU/UK trade deal is that second-hand
used clothing/textile products coming
from the UK must have the UK
declared as the country of origin. To
do otherwise would be legally incor-
rect. The same applies to second-
hand clothing shipped from any EU
member state to the UK.
The fact is that if a customs authority
refuses to accept shipments of used
clothing with the UK correctly record-
ed as the country of origin, then this
in breach of the EU/UK trade deal. We
implore the EU and the UK
Government to get their heads
together and resolve this absurd and
totally unnecessary situation without
further delay.