Download edition as PDF
Subscribe
paper reported that he was still trying to secure export bookings for orders he sold in November. Outside the US, it was a stable start for bulk grades in January after big increases in prices in both the Far East and Europe. Even so,...
Read the entire page 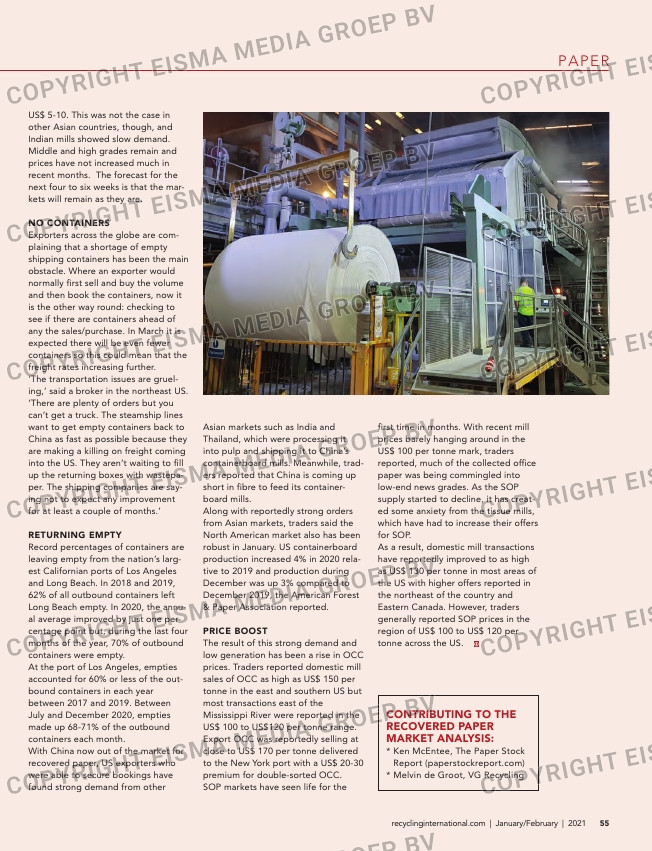 reported that he was still trying to
secure export bookings for orders he
sold in November.
Outside the US, it was a stable start
for bulk grades in January after big
increases in prices in both the Far East
and Europe. Even so, prices Indonesia
and Vietnam moved up by another

US$ 5-10. This was not the case in
other Asian countries, though, and
Indian mills showed slow demand.
Middle and high grades remain and
prices have not increased much in
recent months. The forecast for the
next four to six weeks is that the mar-
kets will remain as they are.

NO CONTAINERS
Exporters across the globe are com-
plaining that a shortage of empty
shipping containers has been the main
obstacle. Where an exporter would
normally first sell and buy the volume
and then book the containers, now it
is the other way round: checking to
see if there are containers ahead of
any the sales/purchase. In March it is
expected there will be even fewer
containers so this could mean that the
freight rates increasing further.
‘The transportation issues are gruel-
ing,’ said a broker in the northeast US.
‘There are plenty of orders but you
can’t get a truck. The steamship lines
want to get empty containers back to
China as fast as possible because they
are making a killing on freight coming
into the US. They aren’t waiting to fill
up the returning boxes with wastepa-
per. The shipping companies are say-
ing not to expect any improvement
for at least a couple of months.’

RETURNING EMPTY
Record percentages of containers are
leaving empty from the nation’s larg-
est Californian ports of Los Angeles
and Long Beach. In 2018 and 2019,
62% of all outbound containers left
Long Beach empty. In 2020, the annu-
al average improved by just one per-
centage point but, during the last four
months of the year, 70% of outbound
containers were empty.
At the port of Los Angeles, empties
accounted for 60% or less of the out-
bound containers in each year
between 2017 and 2019. Between
July and December 2020, empties
made up 68-71% of the outbound
containers each month.
With China now out of the market for
recovered paper, US exporters who
were able to secure bookings have
found strong demand from other

Asian markets such as India and
Thailand, which were processing it
into pulp and shipping it to China’s
containerboard mills. Meanwhile, trad-
ers reported that China is coming up
short in fibre to feed its container-
board mills.
Along with reportedly strong orders
from Asian markets, traders said the
North American market also has been
robust in January. US containerboard
production increased 4% in 2020 rela-
tive to 2019 and production during
December was up 3% compared to
December 2019, the American Forest
& Paper Association reported.

PRICE bOOST
The result of this strong demand and
low generation has been a rise in OCC
prices. Traders reported domestic mill
sales of OCC as high as US$ 150 per
tonne in the east and southern US but
most transactions east of the
Mississippi River were reported in the
US$ 100 to US$120 per tonne range.
Export OCC was reportedly selling at
close to US$ 170 per tonne delivered
to the New York port with a US$ 20-30
premium for double-sorted OCC.
SOP markets have seen life for the

first time in months. With recent mill
prices barely hanging around in the
US$ 100 per tonne mark, traders
reported, much of the collected office
paper was being commingled into
low-end news grades. As the SOP
supply started to decline, it has creat-
ed some anxiety from the tissue mills,
which have had to increase their offers
for SOP.
As a result, domestic mill transactions
have reportedly improved to as high
as US$ 130 per tonne in most areas of
the US with higher offers reported in
the northeast of the country and
Eastern Canada. However, traders
generally reported SOP prices in the
region of US$ 100 to US$ 120 per
tonne across the US.