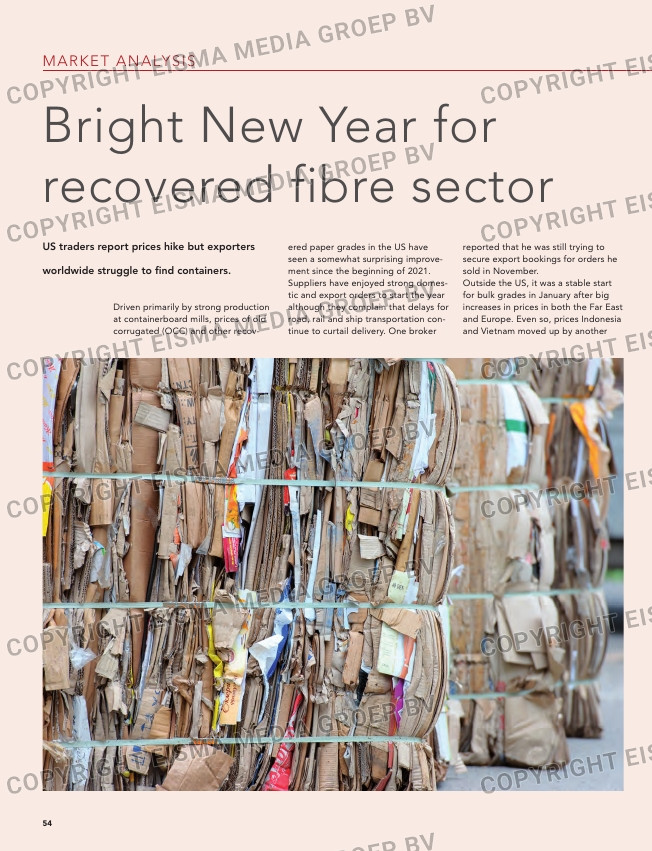 reported that he was still trying to
secure export bookings for orders he
sold in November.
Outside the US, it was a stable start
for bulk grades in January after big
increases in prices in both the Far East
and Europe. Even so, prices Indonesia
and Vietnam moved up by another

Driven primarily by strong production
at containerboard mills, prices of old
corrugated (OCC) and other recov-

US$ 5-10. This was not the case in
other Asian countries, though, and
Indian mills showed slow demand.
Middle and high grades remain and
prices have not increased much in
recent months. The forecast for the
next four to six weeks is that the mar-
kets will remain as they are.

NO CONTAINERS
Exporters across the globe are com-
plaining that a shortage of empty
shipping containers has been the main
obstacle. Where an exporter would
normally first sell and buy the volume
and then book the containers, now it
is the other way round: checking to
see if there are containers ahead of
any the sales/purchase. In March it is
expected there will be even fewer
containers so this could mean that the
freight rates increasing further.
‘The transportation issues are gruel-
ing,’ said a broker in the northeast US.
‘There are plenty of orders but you
can’t get a truck. The steamship lines
want to get empty containers back to
China as fast as possible because they
are making a killing on freight coming
into the US. They aren’t waiting to fill
up the returning boxes with wastepa-
per. The shipping companies are say-
ing not to expect any improvement
for at least a couple of months.’

RETURNING EMPTY
Record percentages of containers are
leaving empty from the nation’s larg-
est Californian ports of Los Angeles
and Long Beach. In 2018 and 2019,
62% of all outbound containers left
Long Beach empty. In 2020, the annu-
al average improved by just one per-
centage point but, during the last four
months of the year, 70% of outbound
containers were empty.
At the port of Los Angeles, empties
accounted for 60% or less of the out-
bound containers in each year
between 2017 and 2019. Between
July and December 2020, empties
made up 68-71% of the outbound
containers each month.
With China now out of the market for
recovered paper, US exporters who
were able to secure bookings have
found strong demand from other

ered paper grades in the US have
seen a somewhat surprising improve-
ment since the beginning of 2021.
Suppliers have enjoyed strong domes-
tic and export orders to start the year
although they complain that delays for
road, rail and ship transportation con-
tinue to curtail delivery. One broker