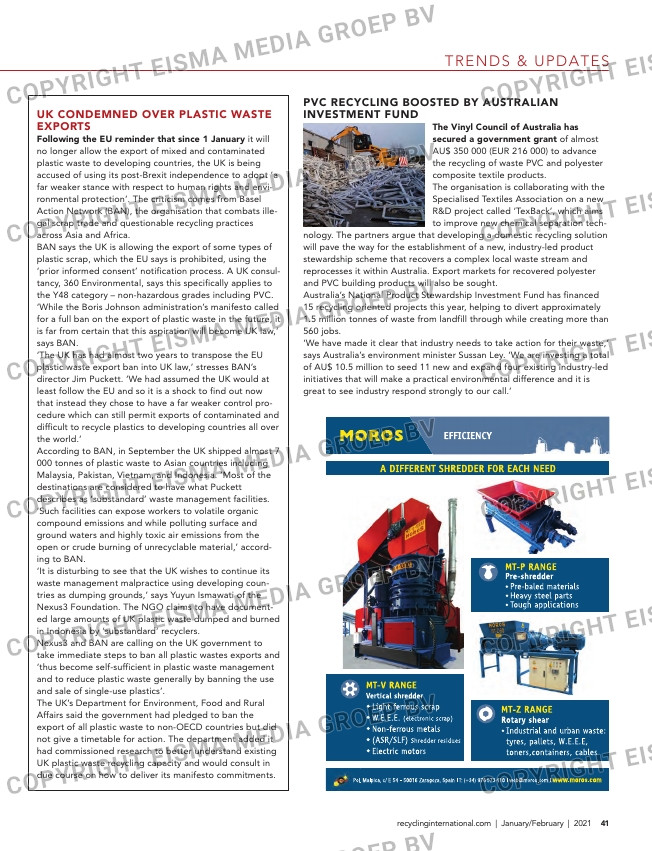 UK condemned over plastic waste
exports
Following the eU reminder that since 1 January it will
no longer allow the export of mixed and contaminated
plastic waste to developing countries, the UK is being
accused of using its post-Brexit independence to adopt ‘a
far weaker stance with respect to human rights and envi-
ronmental protection’. The criticism comes from Basel
Action Network (BAN), the organisation that combats ille-
gal scrap trade and questionable recycling practices
across Asia and Africa.
BAN says the UK is allowing the export of some types of
plastic scrap, which the EU says is prohibited, using the
‘prior informed consent’ notification process. A UK consul-
tancy, 360 Environmental, says this specifically applies to
the Y48 category – non-hazardous grades including PVC.
‘While the Boris Johnson administration’s manifesto called
for a full ban on the export of plastic waste in the future, it
is far from certain that this aspiration will become UK law,’
says BAN.
‘The UK has had almost two years to transpose the EU
plastic waste export ban into UK law,’ stresses BAN’s
director Jim Puckett. ‘We had assumed the UK would at
least follow the EU and so it is a shock to find out now
that instead they chose to have a far weaker control pro-
cedure which can still permit exports of contaminated and
difficult to recycle plastics to developing countries all over
the world.’
According to BAN, in September the UK shipped almost 7
000 tonnes of plastic waste to Asian countries including
Malaysia, Pakistan, Vietnam, and Indonesia. ‘Most of the
destinations are considered to have what Puckett
describes as ‘substandard’ waste management facilities.
‘Such facilities can expose workers to volatile organic
compound emissions and while polluting surface and
ground waters and highly toxic air emissions from the
open or crude burning of unrecyclable material,’ accord-
ing to BAN.
‘It is disturbing to see that the UK wishes to continue its
waste management malpractice using developing coun-
tries as dumping grounds,’ says Yuyun Ismawati of the
Nexus3 Foundation. The NGO claims to have document-
ed large amounts of UK plastic waste dumped and burned
in Indonesia by ‘substandard’ recyclers.
Nexus3 and BAN are calling on the UK government to
take immediate steps to ban all plastic wastes exports and
‘thus become self-sufficient in plastic waste management
and to reduce plastic waste generally by banning the use
and sale of single-use plastics’.
The UK’s Department for Environment, Food and Rural
Affairs said the government had pledged to ban the
export of all plastic waste to non-OECD countries but did
not give a timetable for action. The department added it
had commissioned research to better understand existing
UK plastic waste recycling capacity and would consult in
due course on how to deliver its manifesto commitments.

the vinyl council of australia has
secured a government grant of almost
AU$ 350 000 (EUR 216 000) to advance
the recycling of waste PVC and polyester
composite textile products.
The organisation is collaborating with the
Specialised Textiles Association on a new
R&D project called ‘TexBack’, which aims
to improve new chemical separation tech-

nology. The partners argue that developing a domestic recycling solution
will pave the way for the establishment of a new, industry-led product
stewardship scheme that recovers a complex local waste stream and
reprocesses it within Australia. Export markets for recovered polyester
and PVC building products will also be sought.
Australia’s National Product Stewardship Investment Fund has financed
15 recycling oriented projects this year, helping to divert approximately
1.5 million tonnes of waste from landfill through while creating more than
560 jobs.
‘We have made it clear that industry needs to take action for their waste,’
says Australia’s environment minister Sussan Ley. ‘We are investing a total
of AU$ 10.5 million to seed 11 new and expand four existing industry-led
initiatives that will make a practical environmental difference and it is
great to see industry respond strongly to our call.’