Download edition as PDF
Subscribe
38 Cleaning up in the aftermath of the US elections Countless election signs were planted on lawns, pavements and roadsides across the USA to reach the country’s 328 million inhabitants leading up to the 2020 presidential campaign....
Read the entire page 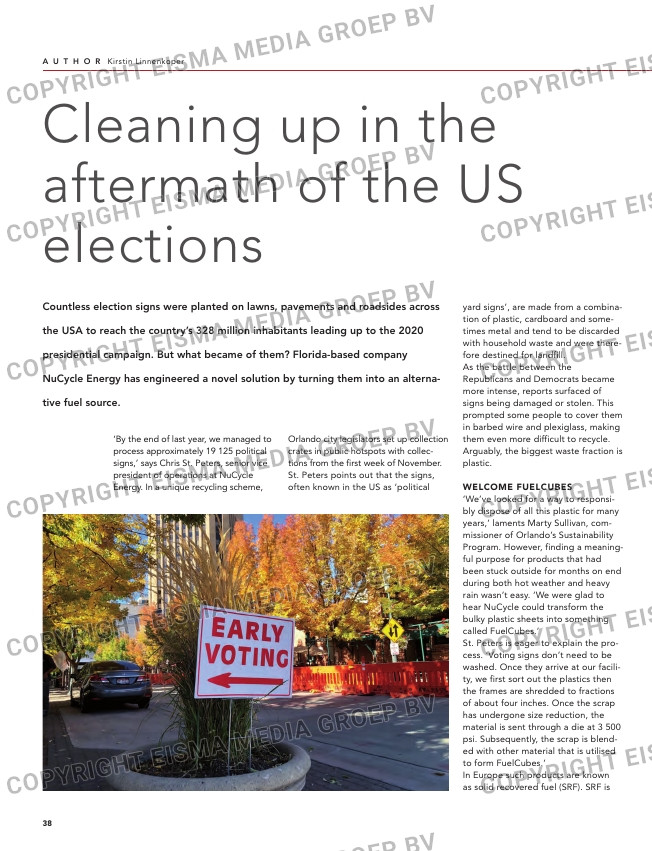 Cleaning up in the
aftermath of the US
elections
Countless election signs were planted on lawns, pavements and roadsides across

presidential campaign. But what became of them? Florida-based company

a non-waste fuel that generates
‘clean’ electricity and represents a
sustainable replacement for coal as
feedstock for the cement industry
and other energy-intensive consum-
ers. St. Peters says the key to
NuCycle’s fuel source is that it has a
British Thermal Unit (BTU) value of
between 9 500-10 500 BTU, similar to
coal. ‘An added benefit is that we
don’t include any chemicals in our
process. Our product is virtually mer-
cury free, chlorine free, and sulphur
free. That makes it a lot more environ-
ment-friendly than relying on tradi-
tional coal.’

Big plans ahead
NuCycle’s first recycling plant for
these signs is designed to process up
to 30 tonnes per hour at full capacity.
‘We began operations in March of
2019 and are still ramping up. We are
currently sending approximately 120
tonnes per day of material to cement
manufacturer Cemex in Brooksville,
Florida,’ St. Peters says.
The idea for FuelCubes dates back to
2004 when NuCycle was trying to find
a solution for various waste materials
that had a reputation for being diffi-
cult to recycle. ‘For example, we col-
lect waste as well as pre-consumer
materials from supermarkets Walmart
and Publix. We also work with furni-
ture outlet Rooms to Go, cookware
brand Williams Sonoma, and even
NASA, to name a few clients. I’m glad
to say that companies really like our
recycling programmes and so we con-
tinue to grow.’
The US recycling community has also
voiced support for NuCycle’s efforts.
‘All in all, we are eager to take
FuelCubes and our other recycling
projects to the next level,’ St. Peters
reports. ‘We are currently in the pro-
cess of setting up five additional
re cycling plants throughout the coun-
try in the next three years.’ This means
that the political yard signs amassed
during the 2024 elections are likely
to yield even more FuelCubes than
this time around. That’s worth voting
for.

‘By the end of last year, we managed to
process approximately 19 125 political
signs,’ says Chris St. Peters, senior vice
president of operations at NuCycle
Energy. In a unique recycling scheme,

Orlando city legislators set up collection
crates in public hotspots with collec-
tions from the first week of November.
St. Peters points out that the signs,
often known in the US as ‘political

yard signs’, are made from a combina-
tion of plastic, cardboard and some-
times metal and tend to be discarded
with household waste and were there-
fore destined for landfill.
As the battle between the
Republicans and Democrats became
more intense, reports surfaced of
signs being damaged or stolen. This
prompted some people to cover them
in barbed wire and plexiglass, making
them even more difficult to recycle.
Arguably, the biggest waste fraction is
plastic.

Welcome FuelcuBes
‘We’ve looked for a way to responsi-
bly dispose of all this plastic for many
years,’ laments Marty Sullivan, com-
missioner of Orlando’s Sustainability
Program. However, finding a meaning-
ful purpose for products that had
been stuck outside for months on end
during both hot weather and heavy
rain wasn’t easy. ‘We were glad to
hear NuCycle could transform the
bulky plastic sheets into something
called FuelCubes.’
St. Peters is eager to explain the pro-
cess. ‘Voting signs don’t need to be
washed. Once they arrive at our facili-
ty, we first sort out the plastics then
the frames are shredded to fractions
of about four inches. Once the scrap
has undergone size reduction, the
material is sent through a die at 3 500
psi. Subsequently, the scrap is blend-
ed with other material that is utilised
to form FuelCubes.’
In Europe such products are known
as solid recovered fuel (SRF). SRF is