Download edition as PDF
Subscribe
37recyclinginternational.com | January/February | 2021 NICHE MARKET HigH Hopes for elium Which kind of thermoplastic would be most suitable for such a high-tech pur- pose was a key question. Berry and Murray are confident that Elium...
Read the entire page 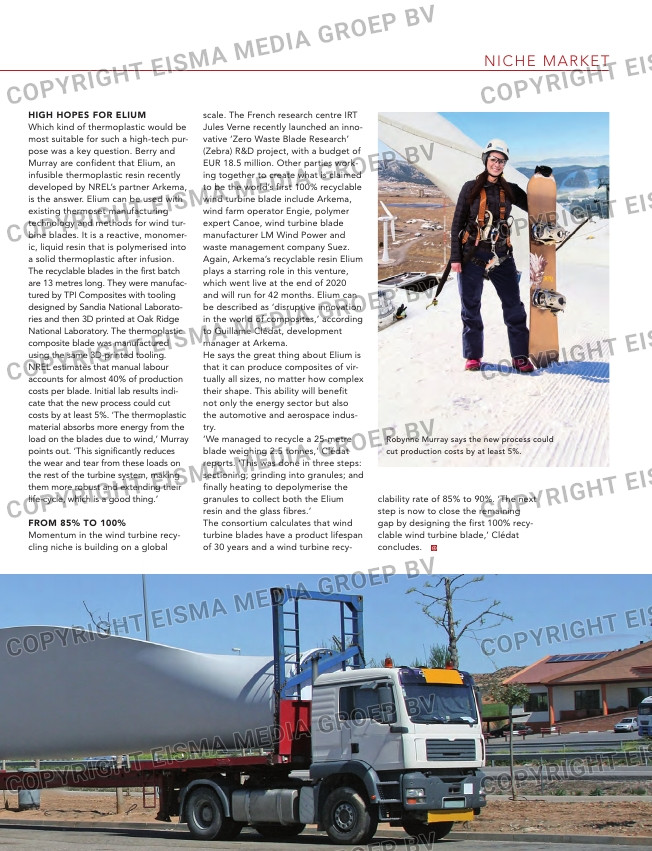 HigH Hopes for elium
Which kind of thermoplastic would be
most suitable for such a high-tech pur-
pose was a key question. Berry and
Murray are confident that Elium, an
infusible thermoplastic resin recently
developed by NREL’s partner Arkema,
is the answer. Elium can be used with
existing thermoset manufacturing
technology and methods for wind tur-
bine blades. It is a reactive, monomer-
ic, liquid resin that is polymerised into
a solid thermoplastic after infusion.
The recyclable blades in the first batch
are 13 metres long. They were manufac-
tured by TPI Composites with tooling
designed by Sandia National Laborato-
ries and then 3D printed at Oak Ridge
National Laboratory. The thermoplastic
composite blade was manufactured
using the same 3D-printed tooling.
NREL estimates that manual labour
accounts for almost 40% of production
costs per blade. Initial lab results indi-
cate that the new process could cut
costs by at least 5%. ‘The thermoplastic
material absorbs more energy from the
load on the blades due to wind,’ Murray
points out. ‘This significantly reduces
the wear and tear from these loads on
the rest of the turbine system, making
them more robust and extending their
life-cycle, which is a good thing.’

scale. The French research centre IRT
Jules Verne recently launched an inno-
vative ‘Zero Waste Blade Research’
(Zebra) R&D project, with a budget of
EUR 18.5 million. Other parties work-
ing together to create what is claimed
to be the world’s first 100% recyclable
wind turbine blade include Arkema,
wind farm operator Engie, polymer
expert Canoe, wind turbine blade
manufacturer LM Wind Power and
waste management company Suez.
Again, Arkema’s recyclable resin Elium
plays a starring role in this venture,
which went live at the end of 2020
and will run for 42 months. Elium can
be described as ‘disruptive innovation
in the world of composites,’ according
to Guillame Clédat, development
manager at Arkema.
He says the great thing about Elium is
that it can produce composites of vir-
tually all sizes, no matter how complex
their shape. This ability will benefit
not only the energy sector but also
the automotive and aerospace indus-
try.
‘We managed to recycle a 25-metre
blade weighing 2.5 tonnes,’ Clédat
reports. ‘This was done in three steps:
sectioning; grinding into granules; and
finally heating to depolymerise the
granules to collect both the Elium
resin and the glass fibres.’
The consortium calculates that wind
turbine blades have a product lifespan
of 30 years and a wind turbine recy-

clability rate of 85% to 90%. ‘The next
step is now to close the remaining
gap by designing the first 100% recy-
clable wind turbine blade,’ Clédat
concludes.

Robynne Murray says the new process could
cut production costs by at least 5%.