Subscribe
36 Saving wind turbine blades from an early grave Thousands of wind turbines swirl above us on the seas, shores, deserts, hills and valleys of the world. Following consistent growth in the last decade, the capacity of the global wind ...
Read the entire page 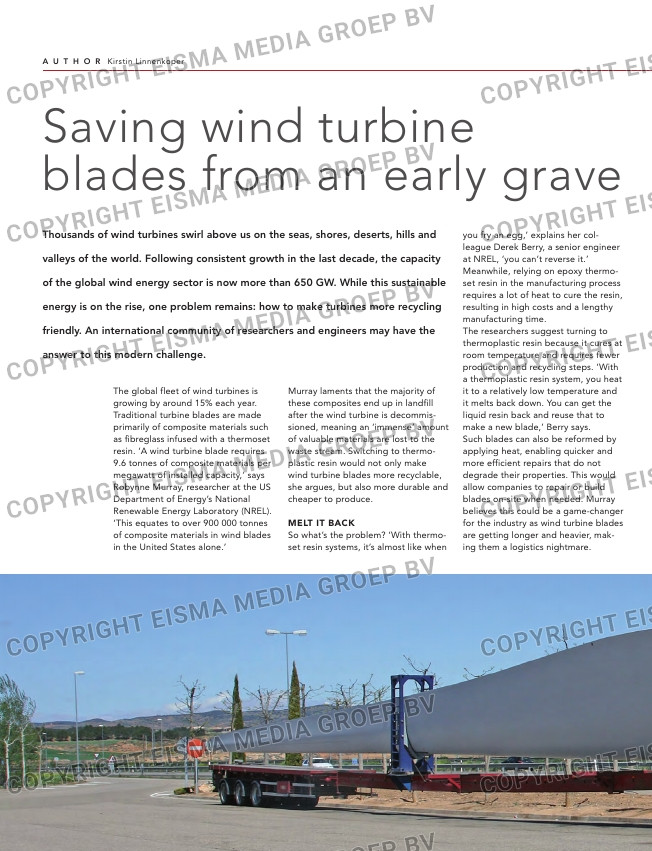 Saving wind turbine
blades from an early grave
Thousands of wind turbines swirl above us on the seas, shores, deserts, hills and

valleys of the world. Following consistent growth in the last decade, the capacity

of the global wind energy sector is now more than 650 GW. While this sustainable

energy is on the rise, one problem remains: how to make turbines more recycling

friendly. An international community of researchers and engineers may have the

answer to this modern challenge.

HigH Hopes for elium
Which kind of thermoplastic would be
most suitable for such a high-tech pur-
pose was a key question. Berry and
Murray are confident that Elium, an
infusible thermoplastic resin recently
developed by NREL’s partner Arkema,
is the answer. Elium can be used with
existing thermoset manufacturing
technology and methods for wind tur-
bine blades. It is a reactive, monomer-
ic, liquid resin that is polymerised into
a solid thermoplastic after infusion.
The recyclable blades in the first batch
are 13 metres long. They were manufac-
tured by TPI Composites with tooling
designed by Sandia National Laborato-
ries and then 3D printed at Oak Ridge
National Laboratory. The thermoplastic
composite blade was manufactured
using the same 3D-printed tooling.
NREL estimates that manual labour
accounts for almost 40% of production
costs per blade. Initial lab results indi-
cate that the new process could cut
costs by at least 5%. ‘The thermoplastic
material absorbs more energy from the
load on the blades due to wind,’ Murray
points out. ‘This significantly reduces
the wear and tear from these loads on
the rest of the turbine system, making
them more robust and extending their
life-cycle, which is a good thing.’

Murray laments that the majority of
these composites end up in landfill
after the wind turbine is decommis-
sioned, meaning an ‘immense’ amount
of valuable materials are lost to the
waste stream. Switching to thermo-
plastic resin would not only make
wind turbine blades more recyclable,
she argues, but also more durable and
cheaper to produce.

melt it back
So what’s the problem? ‘With thermo-
set resin systems, it’s almost like when

you fry an egg,’ explains her col-
league Derek Berry, a senior engineer
at NREL, ‘you can’t reverse it.’
Meanwhile, relying on epoxy thermo-
set resin in the manufacturing process
requires a lot of heat to cure the resin,
resulting in high costs and a lengthy
manufacturing time.
The researchers suggest turning to
thermoplastic resin because it cures at
room temperature and requires fewer
production and recycling steps. ‘With
a thermoplastic resin system, you heat
it to a relatively low temperature and
it melts back down. You can get the
liquid resin back and reuse that to
make a new blade,’ Berry says.
Such blades can also be reformed by
applying heat, enabling quicker and
more efficient repairs that do not
degrade their properties. This would
allow companies to repair or build
blades on-site when needed. Murray
believes this could be a game-changer
for the industry as wind turbine blades
are getting longer and heavier, mak-
ing them a logistics nightmare.