Subscribe
34 three more are expected to arrive this year. They come from Britain, Italy and the United States. ‘We purchased two vessels from Carnival Cruise Lines, the Carnival Fantasy and the Carnival Inspiration,’ says Simsek ‘Our nei...
Read the entire page 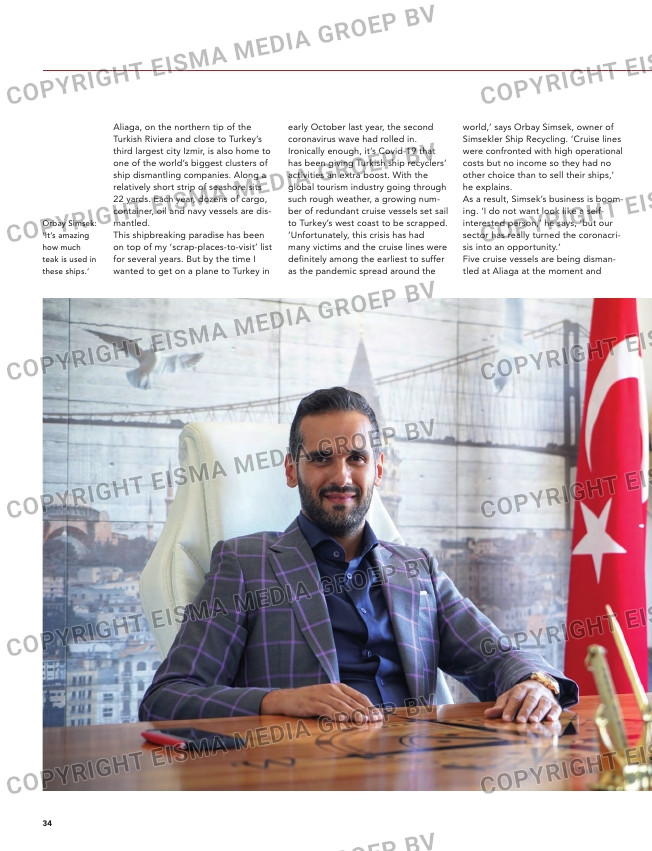 three more are expected to arrive this
year. They come from Britain, Italy and
the United States. ‘We purchased two
vessels from Carnival Cruise Lines, the
Carnival Fantasy and the Carnival
Inspiration,’ says Simsek ‘Our neigh-
bours are taking care of the other
three.’

Aliaga, on the northern tip of the
Turkish Riviera and close to Turkey’s
third largest city Izmir, is also home to
one of the world’s biggest clusters of
ship dismantling companies. Along a
relatively short strip of seashore sits
22 yards. Each year, dozens of cargo,
container, oil and navy vessels are dis-
mantled.
This shipbreaking paradise has been
on top of my ‘scrap-places-to-visit’ list
for several years. But by the time I
wanted to get on a plane to Turkey in

early October last year, the second
coronavirus wave had rolled in.
Ironically enough, it’s Covid-19 that
has been giving Turkish ship recyclers’
activities an extra boost. With the
global tourism industry going through
such rough weather, a growing num-
ber of redundant cruise vessels set sail
to Turkey’s west coast to be scrapped.
‘Unfortunately, this crisis has had
many victims and the cruise lines were
definitely among the earliest to suffer
as the pandemic spread around the

world,’ says Orbay Simsek, owner of
Simsekler Ship Recycling. ‘Cruise lines
were confronted with high operational
costs but no income so they had no
other choice than to sell their ships,’
he explains.
As a result, Simsek’s business is boom-
ing. ‘I do not want look like a self-
interested person,’ he says, ‘but our
sector has really turned the coronacri-
sis into an opportunity.’
Five cruise vessels are being disman-
tled at Aliaga at the moment and

Orbay Simsek:
‘It’s amazing
how much
teak is used in
these ships.’