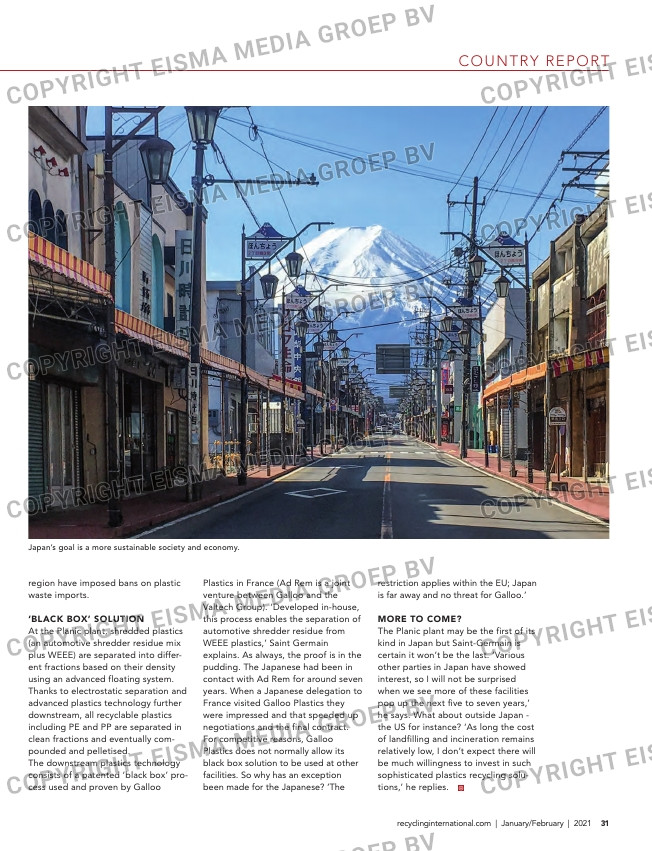 ‘BLACK BOX’ SOLUTION
At the Planic plant, shredded plastics
(an automotive shredder residue mix
plus WEEE) are separated into differ-
ent fractions based on their density
using an advanced floating system.
Thanks to electrostatic separation and
advanced plastics technology further
downstream, all recyclable plastics
including PE and PP are separated in
clean fractions and eventually com-
pounded and pelletised.
The downstream plastics technology
consists of a patented ‘black box’ pro-
cess used and proven by Galloo

Plastics in France (Ad Rem is a joint
venture between Galloo and the
Valtech Group). ‘Developed in-house,
this process enables the separation of
automotive shredder residue from
WEEE plastics,’ Saint Germain
explains. As always, the proof is in the
pudding. The Japanese had been in
contact with Ad Rem for around seven
years. When a Japanese delegation to
France visited Galloo Plastics they
were impressed and that speeded up
negotiations and the final contract.
For competitive reasons, Galloo
Plastics does not normally allow its
black box solution to be used at other
facilities. So why has an exception
been made for the Japanese? ‘The

restriction applies within the EU; Japan
is far away and no threat for Galloo.’

MORE TO COME?
The Planic plant may be the first of its
kind in Japan but Saint-Germain is
certain it won’t be the last. ‘Various
other parties in Japan have showed
interest, so I will not be surprised
when we see more of these facilities
pop up the next five to seven years,’
he says. What about outside Japan –
the US for instance? ‘As long the cost
of landfilling and incineration remains
relatively low, I don’t expect there will
be much willingness to invest in such
sophisticated plastics recycling solu-
tions,’ he replies.

Japan’s goal is a more sustainable society and economy.