Download edition as PDF
Subscribe
COUNTRY REPORT 28 DIVERSE RECYLING EMPIRE Econecol is one of 12 subsidiaries of Japanese Envipro Holdings, a EUR 350 million recycling and trade business. The company is a tech hub for these subsidiaries and provides ‘unique’ recycl...
Read the entire page 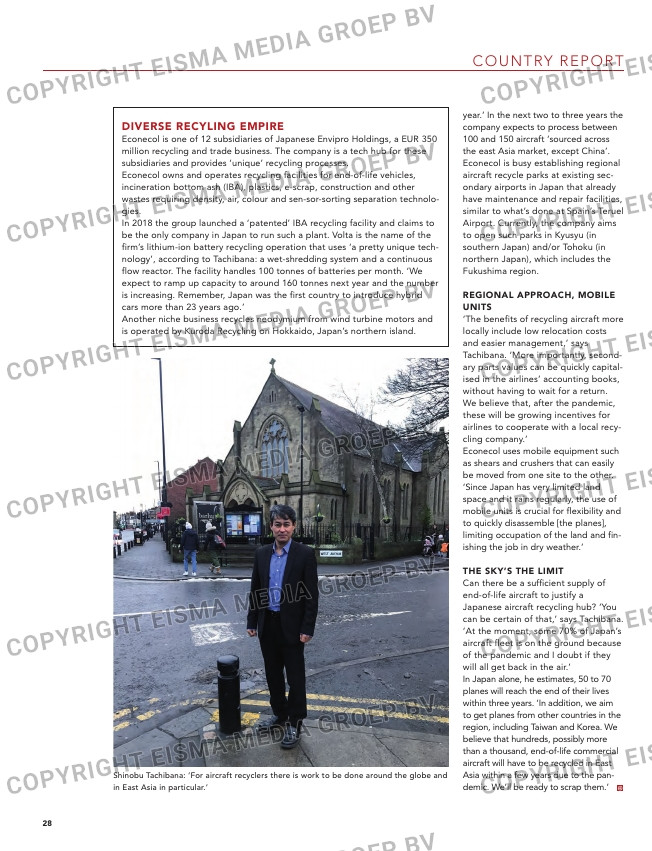 DIVERSE RECYLING EMPIRE
Econecol is one of 12 subsidiaries of Japanese Envipro Holdings, a EUR 350
million recycling and trade business. The company is a tech hub for these
subsidiaries and provides ‘unique’ recycling processes.
Econecol owns and operates recycling facilities for end-of-life vehicles,
incineration bottom ash (IBA), plastics, e-scrap, construction and other
wastes requiring density, air, colour and sen-sor-sorting separation technolo-
gies.
In 2018 the group launched a ‘patented’ IBA recycling facility and claims to
be the only company in Japan to run such a plant. Volta is the name of the
firm’s lithium-ion battery recycling operation that uses ‘a pretty unique tech-
nology’, according to Tachibana: a wet-shredding system and a continuous
flow reactor. The facility handles 100 tonnes of batteries per month. ‘We
expect to ramp up capacity to around 160 tonnes next year and the number
is increasing. Remember, Japan was the first country to introduce hybrid
cars more than 23 years ago.’
Another niche business recycles neodymium from wind turbine motors and
is operated by Kuroda Recycling on Hokkaido, Japan’s northern island.

year.’ In the next two to three years the
company expects to process between
100 and 150 aircraft ‘sourced across
the east Asia market, except China’.
Econecol is busy establishing regional
aircraft recycle parks at existing sec-
ondary airports in Japan that already
have maintenance and repair facilities,
similar to what’s done at Spain’s Teruel
Airport. Currently, the company aims
to open such parks in Kyusyu (in
southern Japan) and/or Tohoku (in
northern Japan), which includes the
Fukushima region.

REGIONAL APPROACH, MOBILE
UNITS
‘The benefits of recycling aircraft more
locally include low relocation costs
and easier management,’ says
Tachibana. ‘More importantly, second-
ary parts values can be quickly capital-
ised in the airlines’ accounting books,
without having to wait for a return.
We believe that, after the pandemic,
these will be growing incentives for
airlines to cooperate with a local recy-
cling company.’
Econecol uses mobile equipment such
as shears and crushers that can easily
be moved from one site to the other.
‘Since Japan has very limited land
space and it rains regularly, the use of
mobile units is crucial for flexibility and
to quickly disassemble [the planes],
limiting occupation of the land and fin-
ishing the job in dry weather.’

THE SKY’S THE LIMIT
Can there be a sufficient supply of
end-of-life aircraft to justify a
Japanese aircraft recycling hub? ‘You
can be certain of that,’ says Tachibana.
‘At the moment, some 70% of Japan’s
aircraft fleet is on the ground because
of the pandemic and I doubt if they
will all get back in the air.’
In Japan alone, he estimates, 50 to 70
planes will reach the end of their lives
within three years. ‘In addition, we aim
to get planes from other countries in the
region, including Taiwan and Korea. We
believe that hundreds, possibly more
than a thousand, end-of-life commercial
aircraft will have to be recycled in East
Asia within a few years due to the pan-
demic. We’ll be ready to scrap them.’

Econecol’s first serious ‘scrap’ job was a Gulfstream G-II jet that was disassembled and cut into pieces at Komaki Airport in central Japan.

Shinobu Tachibana: ‘For aircraft recyclers there is work to be done around the globe and
in East Asia in particular.’