Subscribe
26 Aircraft recycling in Japan heads for the skies The resale in 2019 of two of Japanese government’s Boeing 747-400s, followed recently by the dismantling of three commercial jets, has helped to establish East Asia’s first major ...
Read the entire page 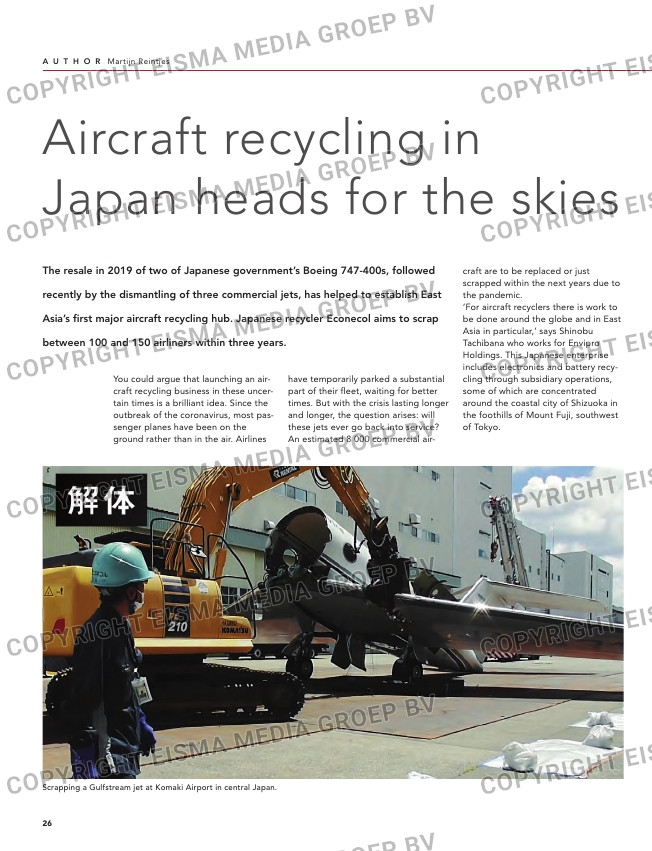 Aircraft recycling in
Japan heads for the skies
The resale in 2019 of two of Japanese government’s Boeing 747-400s, followed

recently by the dismantling of three commercial jets, has helped to establish East

between 100 and 150 airliners within three years.

LET’S DO PLANES, TOO
In the past decade, Nikkei-listed
Envipro has seen a rapid growth in its
wider recycling activities, boosted by
Japan’s ever stricter environmental
rules and the growing hunger for pre-
cious metals at home and across
South-East Asia’s emerging econo-
mies. Recently, the company has taken
up a new challenge: to establish an
infrastructure for aircraft recycling in
Japan operating under Envipro’s sub-
sidiary Econecol.
‘We are the first in the region. Outside
of China there are no scrapping facili-
ties for end-of-life commercial planes
in South-East Asia,’ explains
Tachibana, who is based in Envipro’s
overseas trade office in Newcastle,
UK.

COSTLY FAREWELL
In the past, most recycling of end-of-
life commercial aircraft from Japan,
Taiwan, Korea and other Asian coun-
tries was carried out in the USA, EU
and Australia, according to Tachibana.
‘Parking aged planes in US deserts is
a waste,’ he insists. ‘Airlines spend a
lot of money just returning the air-
craft. Getting back a redundant plane
alone can cost up to EUR 80 000 for
insurance, pilot fees, fuel and landing
rights. On top of that airlines have
had to wait a long time to receive the
final evaluation reports. So we
thought: organise proper dismantling
and recycling closer to home, saving
headaches and money.’

IN TIP-TOP CONDITION
Econecol became involved in the air-
craft business in 2019 when the com-
pany bought the Japanese govern-
ment’s aged ‘Airforce One’ and
‘Airforce Two’ Boeing 747-400s. ‘The
task was to resell rather than scrap
them,’ says Tachibana. ‘As you can
imagine these aircraft had been very
well maintained so it would have been
a waste to scrap them. We soon found
a new, happy owner.’
Meanwhile the company’s recycling
activities have taken off. The first seri-
ous ‘scrap’ job was a Gulfstream G-II
jet that was disassembled and cut into
pieces at Komaki Airport in central

You could argue that launching an air-
craft recycling business in these uncer-
tain times is a brilliant idea. Since the
outbreak of the coronavirus, most pas-
senger planes have been on the
ground rather than in the air. Airlines

have temporarily parked a substantial
part of their fleet, waiting for better
times. But with the crisis lasting longer
and longer, the question arises: will
these jets ever go back into service?
An estimated 8 000 commercial air-

craft are to be replaced or just
scrapped within the next years due to
the pandemic.
‘For aircraft recyclers there is work to
be done around the globe and in East
Asia in particular,’ says Shinobu
Tachibana who works for Envipro
Holdings. This Japanese enterprise
includes electronics and battery recy-
cling through subsidiary operations,
some of which are concentrated
around the coastal city of Shizuoka in
the foothills of Mount Fuji, southwest
of Tokyo.

Scrapping a Gulfstream jet at Komaki Airport in central Japan.