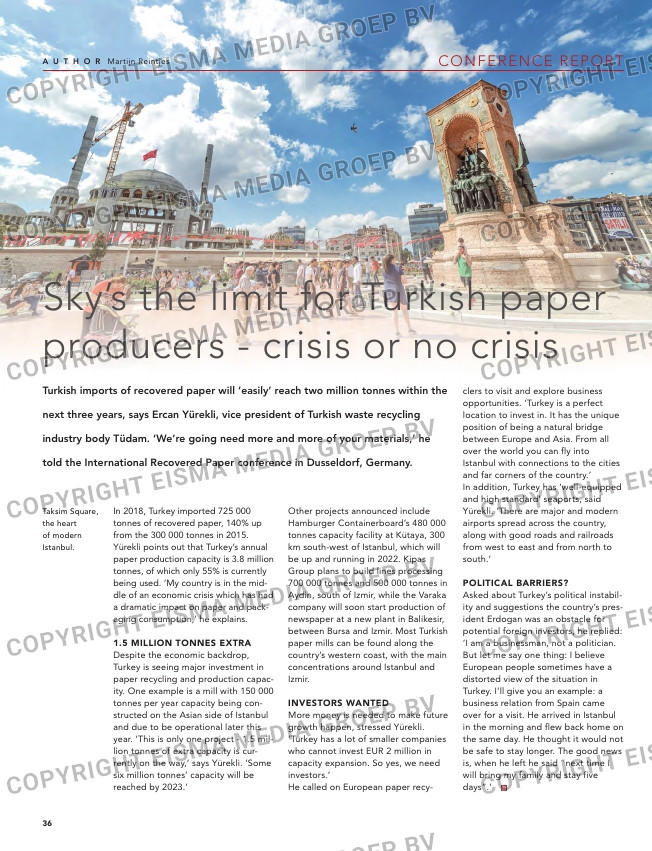 industry body tüdam. ‘We’re going need more and more of your materials,’ he

In 2018, Turkey imported 725 000
tonnes of recovered paper, 140% up
from the 300 000 tonnes in 2015.
Yürekli points out that Turkey’s annual
paper production capacity is 3.8 million
tonnes, of which only 55% is currently
being used. ‘My country is in the mid-
dle of an economic crisis which has had
a dramatic impact on paper and pack-
aging consumption,’ he explains.

1.5 million tonneS eXtra
Despite the economic backdrop,
Turkey is seeing major investment in
paper recycling and production capac-
ity. One example is a mill with 150 000
tonnes per year capacity being con-
structed on the Asian side of Istanbul
and due to be operational later this
year. ‘This is only one project – 1.5 mil-
lion tonnes of extra capacity is cur-
rently on the way,’ says Yürekli. ‘Some
six million tonnes’ capacity will be
reached by 2023.’

Other projects announced include
Hamburger Containerboard’s 480 000
tonnes capacity facility at Kütaya, 300
km south-west of Istanbul, which will
be up and running in 2022. Kipas
Group plans to build lines processing
700 000 tonnes and 500 000 tonnes in
Aydin, south of Izmir, while the Varaka
company will soon start production of
newspaper at a new plant in Balikesir,
between Bursa and Izmir. Most Turkish
paper mills can be found along the
country’s western coast, with the main
concentrations around Istanbul and
Izmir.

clers to visit and explore business
opportunities. ‘Turkey is a perfect
location to invest in. It has the unique
position of being a natural bridge
between Europe and Asia. From all
over the world you can fly into
Istanbul with connections to the cities
and far corners of the country.’
In addition, Turkey has ‘well-equipped
and high standard’ seaports, said
Yürekli. ‘There are major and modern
airports spread across the country,
along with good roads and railroads
from west to east and from north to
south.’

political BarrierS?
Asked about Turkey’s political instabil-
ity and suggestions the country’s pres-
ident Erdogan was an obstacle for
potential foreign investors, he replied:
‘I am a businessman, not a politician.
But let me say one thing: I believe
European people sometimes have a
distorted view of the situation in
Turkey. I’ll give you an example: a
business relation from Spain came
over for a visit. He arrived in Istanbul
in the morning and flew back home on
the same day. He thought it would not
be safe to stay longer. The good news
is, when he left he said “next time I
will bring my family and stay five
days”.’