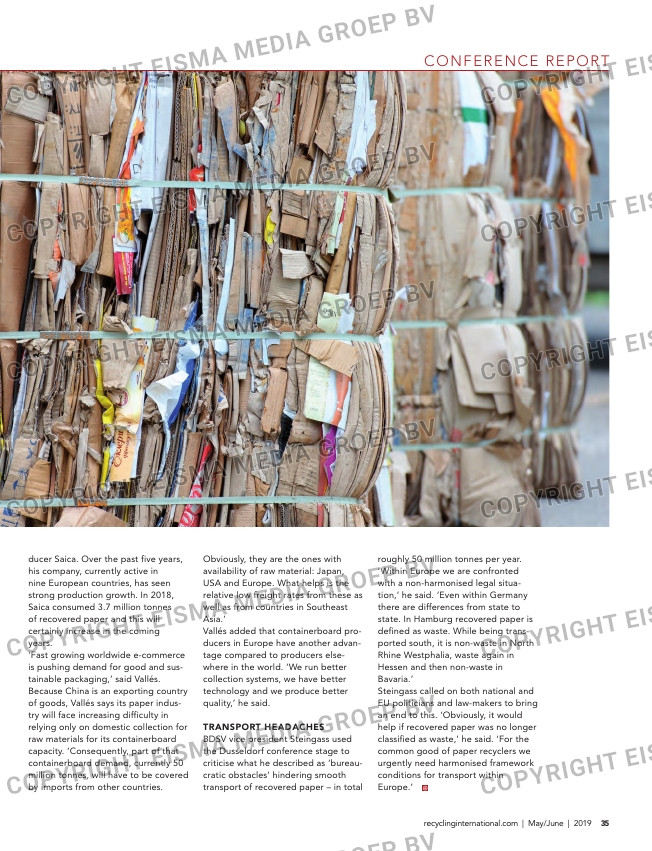 ducer Saica. Over the past five years,
his company, currently active in
nine European countries, has seen
strong production growth. In 2018,
Saica consumed 3.7 million tonnes
of recovered paper and this will
certainly increase in the coming
years.
‘Fast growing worldwide e-commerce
is pushing demand for good and sus-
tainable packaging,’ said Vallés.
Because China is an exporting country
of goods, Vallés says its paper indus-
try will face increasing difficulty in
relying only on domestic collection for
raw materials for its containerboard
capacity. ‘Consequently, part of that
containerboard demand, currently 50
million tonnes, will have to be covered
by imports from other countries.

Obviously, they are the ones with
availability of raw material: Japan,
USA and Europe. What helps is the
relative low freight rates from these as
well as from countries in Southeast
Asia.’
Vallés added that containerboard pro-
ducers in Europe have another advan-
tage compared to producers else-
where in the world. ‘We run better
collection systems, we have better
technology and we produce better
quality,’ he said.

roughly 50 million tonnes per year.
‘Within Europe we are confronted
with a non-harmonised legal situa-
tion,’ he said. ‘Even within Germany
there are differences from state to
state. In Hamburg recovered paper is
defined as waste. While being trans-
ported south, it is non-waste in North
Rhine Westphalia, waste again in
Hessen and then non-waste in
Bavaria.’
Steingass called on both national and
EU politicians and law-makers to bring
an end to this. ‘Obviously, it would
help if recovered paper was no longer
classified as waste,’ he said. ‘For the
common good of paper recyclers we
urgently need harmonised framework
conditions for transport within
Europe.’