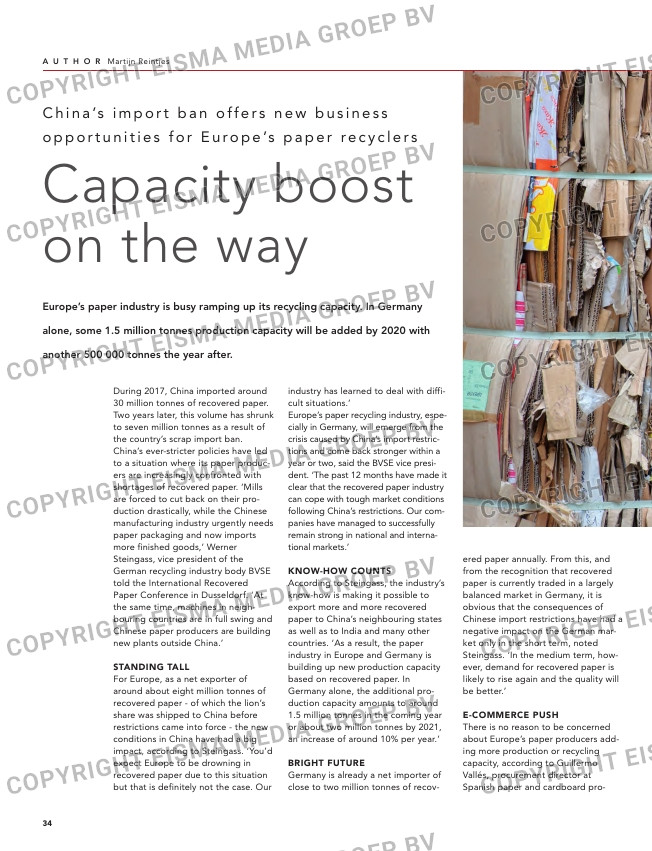 Capacity boost
on the way

Europe’s paper industry is busy ramping up its recycling capacity. In Germany

alone, some 1.5 million tonnes production capacity will be added by 2020 with

ducer Saica. Over the past five years,
his company, currently active in
nine European countries, has seen
strong production growth. In 2018,
Saica consumed 3.7 million tonnes
of recovered paper and this will
certainly increase in the coming
years.
‘Fast growing worldwide e-commerce
is pushing demand for good and sus-
tainable packaging,’ said Vallés.
Because China is an exporting country
of goods, Vallés says its paper indus-
try will face increasing difficulty in
relying only on domestic collection for
raw materials for its containerboard
capacity. ‘Consequently, part of that
containerboard demand, currently 50
million tonnes, will have to be covered
by imports from other countries.

During 2017, China imported around
30 million tonnes of recovered paper.
Two years later, this volume has shrunk
to seven million tonnes as a result of
the country’s scrap import ban.
China’s ever-stricter policies have led
to a situation where its paper produc-
ers are increasingly confronted with
shortages of recovered paper. ‘Mills
are forced to cut back on their pro-
duction drastically, while the Chinese
manufacturing industry urgently needs
paper packaging and now imports
more finished goods,’ Werner
Steingass, vice president of the
German recycling industry body BVSE
told the International Recovered
Paper Conference in Dusseldorf. ‘At
the same time, machines in neigh-
bouring countries are in full swing and
Chinese paper producers are building
new plants outside China.’

Standing tall
For Europe, as a net exporter of
around about eight million tonnes of
recovered paper – of which the lion’s
share was shipped to China before
restrictions came into force – the new
conditions in China have had a big
impact, according to Steingass. ‘You’d
expect Europe to be drowning in
recovered paper due to this situation
but that is definitely not the case. Our

industry has learned to deal with diffi-
cult situations.’
Europe’s paper recycling industry, espe-
cially in Germany, will emerge from the
crisis caused by China’s import restric-
tions and come back stronger within a
year or two, said the BVSE vice presi-
dent. ‘The past 12 months have made it
clear that the recovered paper industry
can cope with tough market conditions
following China’s restrictions. Our com-
panies have managed to successfully
remain strong in national and interna-
tional markets.’

Know-how countS
According to Steingass, the industry’s
know-how is making it possible to
export more and more recovered
paper to China’s neighbouring states
as well as to India and many other
countries. ‘As a result, the paper
industry in Europe and Germany is
building up new production capacity
based on recovered paper. In
Germany alone, the additional pro-
duction capacity amounts to around
1.5 million tonnes in the coming year
or about two million tonnes by 2021,
an increase of around 10% per year.’

ered paper annually. From this, and
from the recognition that recovered
paper is currently traded in a largely
balanced market in Germany, it is
obvious that the consequences of
Chinese import restrictions have had a
negative impact on the German mar-
ket only in the short term, noted
Steingass. ‘In the medium term, how-
ever, demand for recovered paper is
likely to rise again and the quality will
be better.’

e-commerce puSh
There is no reason to be concerned
about Europe’s paper producers add-
ing more production or recycling
capacity, according to Guillermo
Vallés, procurement director at
Spanish paper and cardboard pro-