Subscribe
TECHNOLOGY EXPERTS many improvements have been made to the original design. Vezzani did so to reflect the changing quality of scrap over the last 40 years and to keep up with the demands for higher production capacities sought by the m...
Read the entire page 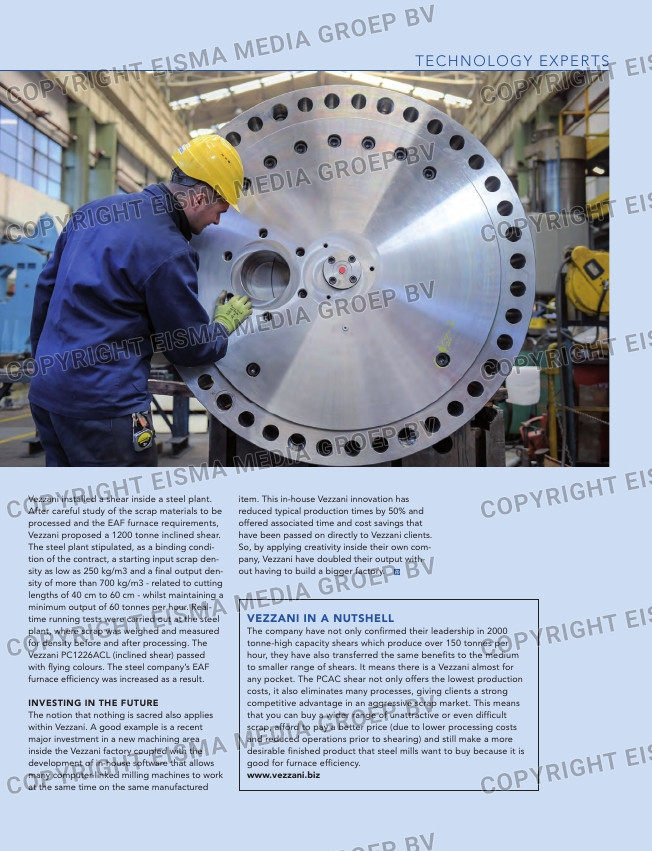 many improvements have been made to the
original design. Vezzani did so to reflect the
changing quality of scrap over the last 40 years
and to keep up with the demands for higher
production capacities sought by the market.
Machines built in the 1970s dealt with heavy
scrap that is now hard to find.
A new offering from Vezzani is the PC1226
ACL which offers an average 60 tonnes per
hour productivity, even with very light volumi-
nous scrap. This new version has a limited
footprint so it can fit into a small yard, boasts
reduced installed power and a low loading
height similar to a traditional horizontal shear.
No special foundations are needed so it is
cheap to buy, install and run. Processing costs
are typically 50% of a standard shear. This
new-design PCAC shear can be applied to any
guillotine versions with a shear size of 700
tonnes and above. These new machines are
already running worldwide.

Production tests
While others only promise results, Vezzani
guarantee production and final scrap output
quality. A typical example is a successfully
completed contract in South East Asia where

Vezzani installed a shear inside a steel plant.
After careful study of the scrap materials to be
processed and the EAF furnace requirements,
Vezzani proposed a 1200 tonne inclined shear.
The steel plant stipulated, as a binding condi-
tion of the contract, a starting input scrap den-
sity as low as 250 kg/m3 and a final output den-
sity of more than 700 kg/m3 – related to cutting
lengths of 40 cm to 60 cm – whilst maintaining a
minimum output of 60 tonnes per hour. Real-
time running tests were carried out at the steel
plant, where scrap was weighed and measured
for density before and after processing. The
Vezzani PC1226ACL (inclined shear) passed
with flying colours. The steel company’s EAF
furnace efficiency was increased as a result.

investing in the future
The notion that nothing is sacred also applies
within Vezzani. A good example is a recent
major investment in a new machining area
inside the Vezzani factory coupled with the
development of in-house software that allows
many computer-linked milling machines to work
at the same time on the same manufactured

item. This in-house Vezzani innovation has
reduced typical production times by 50% and
offered associated time and cost savings that
have been passed on directly to Vezzani clients.
So, by applying creativity inside their own com-
pany, Vezzani have doubled their output with-
out having to build a bigger factory.

vezzani in a nutsheLL
The company have not only confirmed their leadership in 2000
tonne-high capacity shears which produce over 150 tonnes per
hour, they have also transferred the same benefits to the medium
to smaller range of shears. It means there is a Vezzani almost for
any pocket. The PCAC shear not only offers the lowest production
costs, it also eliminates many processes, giving clients a strong
competitive advantage in an aggressive scrap market. This means
that you can buy a wider range of unattractive or even difficult
scrap, afford to pay a better price (due to lower processing costs
and reduced operations prior to shearing) and still make a more
desirable finished product that steel mills want to buy because it is
good for furnace efficiency.
www.vezzani.biz