Subscribe
24 AUTOMOTIVE survey says outlook ‘reMains good’ Around 56% of delegates attending IARC view the economic situation of the car recycling sector as ‘favourable’. Another 30% of the 325 participants in the IARC Industrial Barom...
Read the entire page 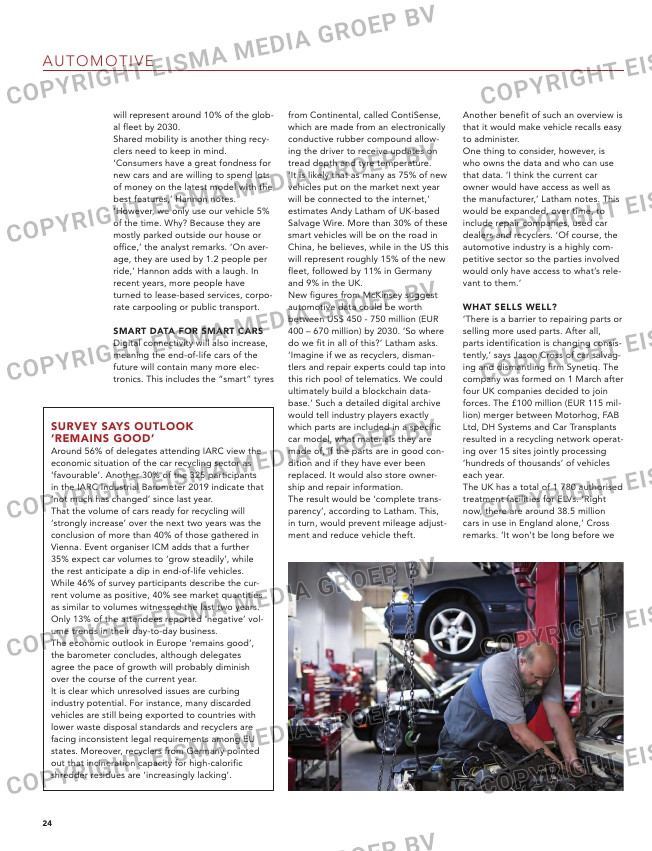 survey says outlook
‘reMains good’
Around 56% of delegates attending IARC view the
economic situation of the car recycling sector as
‘favourable’. Another 30% of the 325 participants
in the IARC Industrial Barometer 2019 indicate that
‘not much has changed’ since last year.
That the volume of cars ready for recycling will
‘strongly increase’ over the next two years was the
conclusion of more than 40% of those gathered in
Vienna. Event organiser ICM adds that a further
35% expect car volumes to ‘grow steadily’, while
the rest anticipate a dip in end-of-life vehicles.
While 46% of survey participants describe the cur-
rent volume as positive, 40% see market quantities
as similar to volumes witnessed the last two years.
Only 13% of the attendees reported ‘negative’ vol-
ume trends in their day-to-day business.
The economic outlook in Europe ‘remains good’,
the barometer concludes, although delegates
agree the pace of growth will probably diminish
over the course of the current year.
It is clear which unresolved issues are curbing
industry potential. For instance, many discarded
vehicles are still being exported to countries with
lower waste disposal standards and recyclers are
facing inconsistent legal requirements among EU
states. Moreover, recyclers from Germany pointed
out that incineration capacity for high-calorific
shredder residues are ‘increasingly lacking’.

will represent around 10% of the glob-
al fleet by 2030.
Shared mobility is another thing recy-
clers need to keep in mind.
‘Consumers have a great fondness for
new cars and are willing to spend lots
of money on the latest model with the
best features,’ Hannon notes.
‘However, we only use our vehicle 5%
of the time. Why? Because they are
mostly parked outside our house or
office,’ the analyst remarks. ‘On aver-
age, they are used by 1.2 people per
ride,’ Hannon adds with a laugh. In
recent years, more people have
turned to lease-based services, corpo-
rate carpooling or public transport.

sMart data for sMart cars
Digital connectivity will also increase,
meaning the end-of-life cars of the
future will contain many more elec-
tronics. This includes the “smart” tyres

from Continental, called ContiSense,
which are made from an electronically
conductive rubber compound allow-
ing the driver to receive updates on
tread depth and tyre temperature.
‘It is likely that as many as 75% of new
vehicles put on the market next year
will be connected to the internet,’
estimates Andy Latham of UK-based
Salvage Wire. More than 30% of these
smart vehicles will be on the road in
China, he believes, while in the US this
will represent roughly 15% of the new
fleet, followed by 11% in Germany
and 9% in the UK.
New figures from McKinsey suggest
automotive data could be worth
between US$ 450 – 750 million (EUR
400 – 670 million) by 2030. ‘So where
do we fit in all of this?’ Latham asks.
‘Imagine if we as recyclers, disman-
tlers and repair experts could tap into
this rich pool of telematics. We could
ultimately build a blockchain data-
base.’ Such a detailed digital archive
would tell industry players exactly
which parts are included in a specific
car model, what materials they are
made of, if the parts are in good con-
dition and if they have ever been
replaced. It would also store owner-
ship and repair information.
The result would be ‘complete trans-
parency’, according to Latham. This,
in turn, would prevent mileage adjust-
ment and reduce vehicle theft.

Another benefit of such an overview is
that it would make vehicle recalls easy
to administer.
One thing to consider, however, is
who owns the data and who can use
that data. ‘I think the current car
owner would have access as well as
the manufacturer,’ Latham notes. This
would be expanded, over time, to
include repair companies, used car
dealers and recyclers. ‘Of course, the
automotive industry is a highly com-
petitive sector so the parties involved
would only have access to what’s rele-
vant to them.’

What sells Well?
‘There is a barrier to repairing parts or
selling more used parts. After all,
parts identification is changing consis-
tently,’ says Jason Cross of car salvag-
ing and dismantling firm Synetiq. The
company was formed on 1 March after
four UK companies decided to join
forces. The £100 million (EUR 115 mil-
lion) merger between Motorhog, FAB
Ltd, DH Systems and Car Transplants
resulted in a recycling network operat-
ing over 15 sites jointly processing
‘hundreds of thousands’ of vehicles
each year.
The UK has a total of 1 780 authorised
treatment facilities for ELVs. ‘Right
now, there are around 38.5 million
cars in use in England alone,’ Cross
remarks. ‘It won’t be long before we