Subscribe
AUTOMOTIVE 23recyclinginternational.com | May/June | 2019 More than 70 million cars were produced worldwide last year. although produc- tion is currently down 1.5%, over six million vehicles are discarded in the Eu alone each year....
Read the entire page 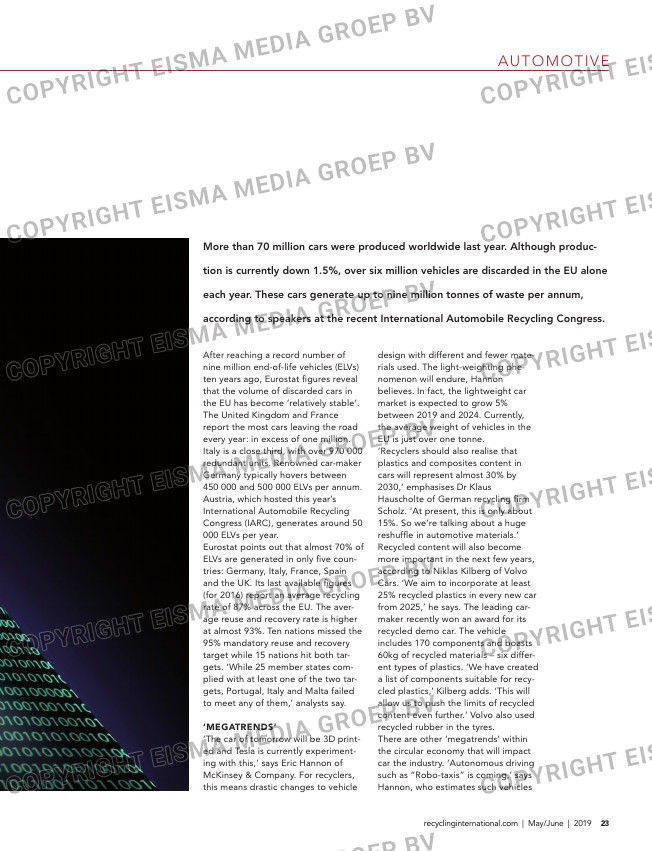 tion is currently down 1.5%, over six million vehicles are discarded in the Eu alone

each year. these cars generate up to nine million tonnes of waste per annum,

according to speakers at the recent International automobile recycling Congress.

After reaching a record number of
nine million end-of-life vehicles (ELVs)
ten years ago, Eurostat figures reveal
that the volume of discarded cars in
the EU has become ‘relatively stable’.
The United Kingdom and France
report the most cars leaving the road
every year: in excess of one million.
Italy is a close third, with over 970 000
redundant units. Renowned car-maker
Germany typically hovers between
450 000 and 500 000 ELVs per annum.
Austria, which hosted this year’s
International Automobile Recycling
Congress (IARC), generates around 50
000 ELVs per year.
Eurostat points out that almost 70% of
ELVs are generated in only five coun-
tries: Germany, Italy, France, Spain
and the UK. Its last available figures
(for 2016) report an average recycling
rate of 87% across the EU. The aver-
age reuse and recovery rate is higher
at almost 93%. Ten nations missed the
95% mandatory reuse and recovery
target while 15 nations hit both tar-
gets. ‘While 25 member states com-
plied with at least one of the two tar-
gets, Portugal, Italy and Malta failed
to meet any of them,’ analysts say.

‘Megatrends’
‘The car of tomorrow will be 3D print-
ed and Tesla is currently experiment-
ing with this,’ says Eric Hannon of
McKinsey & Company. For recyclers,
this means drastic changes to vehicle

design with different and fewer mate-
rials used. The light-weighting phe-
nomenon will endure, Hannon
believes. In fact, the lightweight car
market is expected to grow 5%
between 2019 and 2024. Currently,
the average weight of vehicles in the
EU is just over one tonne.
‘Recyclers should also realise that
plastics and composites content in
cars will represent almost 30% by
2030,’ emphasises Dr Klaus
Hauscholte of German recycling firm
Scholz. ‘At present, this is only about
15%. So we’re talking about a huge
reshuffle in automotive materials.’
Recycled content will also become
more important in the next few years,
according to Niklas Kilberg of Volvo
Cars. ‘We aim to incorporate at least
25% recycled plastics in every new car
from 2025,’ he says. The leading car-
maker recently won an award for its
recycled demo car. The vehicle
includes 170 components and boasts
60kg of recycled materials – six differ-
ent types of plastics. ‘We have created
a list of components suitable for recy-
cled plastics,’ Kilberg adds. ‘This will
allow us to push the limits of recycled
content even further.’ Volvo also used
recycled rubber in the tyres.
There are other ‘megatrends’ within
the circular economy that will impact
car the industry. ‘Autonomous driving
such as “Robo-taxis” is coming,’ says
Hannon, who estimates such vehicles