Subscribe
ISRI 2019 ConventIon & expo 16 ‘GUyS, i love yoUr MaGazine’ What started as another ISRI expo Tuesday at the Recycling International stand ended as a day full of highlights. One was when sales manager Judith Wanjala (right) a...
Read the entire page 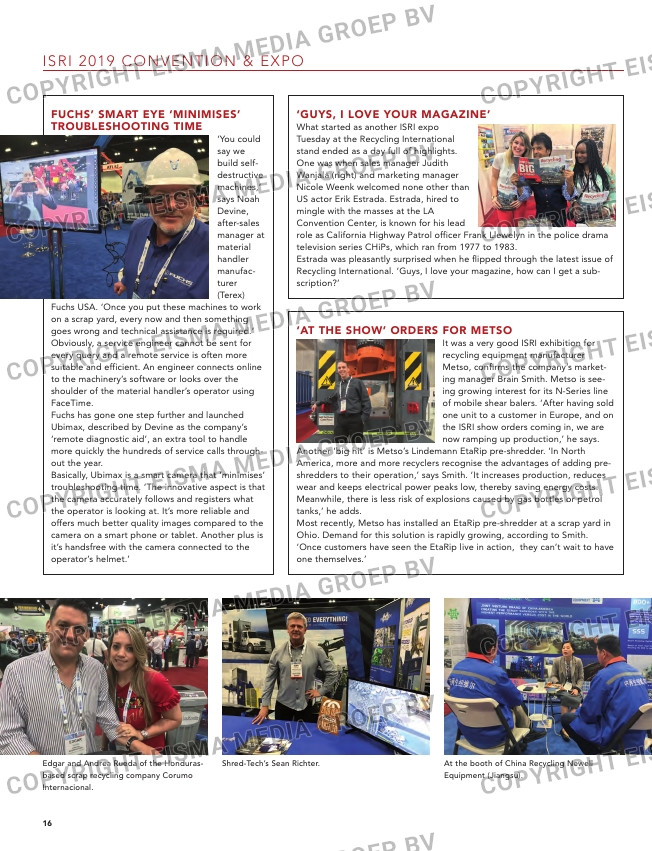 ‘GUyS, i love yoUr MaGazine’
What started as another ISRI expo
Tuesday at the Recycling International
stand ended as a day full of highlights.
One was when sales manager Judith
Wanjala (right) and marketing manager
Nicole Weenk welcomed none other than
US actor Erik Estrada. Estrada, hired to
mingle with the masses at the LA
Convention Center, is known for his lead
role as California Highway Patrol officer Frank Llewelyn in the police drama
television series CHiPs, which ran from 1977 to 1983.
Estrada was pleasantly surprised when he flipped through the latest issue of
Recycling International. ‘Guys, I love your magazine, how can I get a sub-
scription?’

Fuchs USA. ‘Once you put these machines to work
on a scrap yard, every now and then something
goes wrong and technical assistance is required.’
Obviously, a service engineer cannot be sent for
every query and a remote service is often more
suitable and efficient. An engineer connects online
to the machinery’s software or looks over the
shoulder of the material handler’s operator using
FaceTime.
Fuchs has gone one step further and launched
Ubimax, described by Devine as the company’s
‘remote diagnostic aid’, an extra tool to handle
more quickly the hundreds of service calls through-
out the year.
Basically, Ubimax is a smart camera that ‘minimises’
troubleshooting time. ‘The innovative aspect is that
the camera accurately follows and registers what
the operator is looking at. It’s more reliable and
offers much better quality images compared to the
camera on a smart phone or tablet. Another plus is
it’s handsfree with the camera connected to the
operator’s helmet.’

‘at the Show’ orDerS For MetSo
It was a very good ISRI exhibition for
recycling equipment manufacturer
Metso, confirms the company’s market-
ing manager Brain Smith. Metso is see-
ing growing interest for its N-Series line
of mobile shear balers. ‘After having sold
one unit to a customer in Europe, and on
the ISRI show orders coming in, we are
now ramping up production,’ he says.

Another ‘big hit’ is Metso’s Lindemann EtaRip pre-shredder. ‘In North
America, more and more recyclers recognise the advantages of adding pre-
shredders to their operation,’ says Smith. ‘It increases production, reduces
wear and keeps electrical power peaks low, thereby saving energy costs.
Meanwhile, there is less risk of explosions caused by gas bottles or petrol
tanks,’ he adds.
Most recently, Metso has installed an EtaRip pre-shredder at a scrap yard in
Ohio. Demand for this solution is rapidly growing, according to Smith.
‘Once customers have seen the EtaRip live in action, they can’t wait to have
one themselves.’

Edgar and Andrea Rueda of the Honduras-
based scrap recycling company Corumo
Internacional.