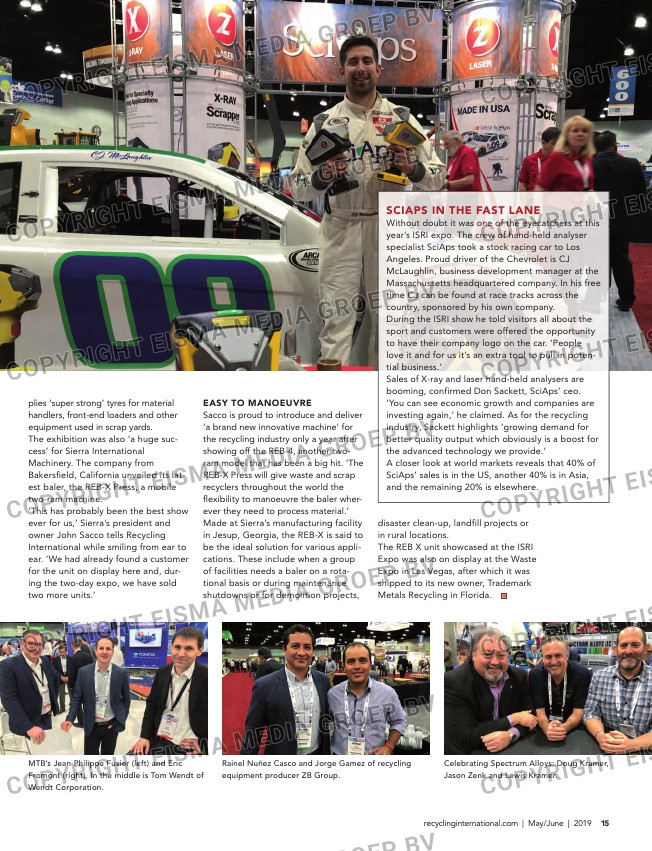 plies ‘super strong’ tyres for material
handlers, front-end loaders and other
equipment used in scrap yards.
The exhibition was also ‘a huge suc-
cess’ for Sierra International
Machinery. The company from
Bakersfield, California unveiled its lat-
est baler, the REB-X Press, a mobile
two-ram machine.
‘This has probably been the best show
ever for us,’ Sierra’s president and
owner John Sacco tells Recycling
International while smiling from ear to
ear. ‘We had already found a customer
for the unit on display here and, dur-
ing the two-day expo, we have sold
two more units.’

eaSy to ManoeUvre
Sacco is proud to introduce and deliver
‘a brand new innovative machine’ for
the recycling industry only a year after
showing off the REB-4, another two-
ram model that has been a big hit. ‘The
REB-X Press will give waste and scrap
recyclers throughout the world the
flexibility to manoeuvre the baler wher-
ever they need to process material.’
Made at Sierra’s manufacturing facility
in Jesup, Georgia, the REB-X is said to
be the ideal solution for various appli-
cations. These include when a group
of facilities needs a baler on a rota-
tional basis or during maintenance
shutdowns or for demolition projects,

disaster clean-up, landfill projects or
in rural locations.
The REB X unit showcased at the ISRI
Expo was also on display at the Waste
Expo in Las Vegas, after which it was
shipped to its new owner, Trademark
Metals Recycling in Florida.

SciapS in the FaSt lane
Without doubt it was one of the eyecatchers at this
year’s ISRI expo. The crew of hand-held analyser
specialist SciAps took a stock racing car to Los
Angeles. Proud driver of the Chevrolet is CJ
McLaughlin, business development manager at the
Massachussetts headquartered company. In his free
time CJ can be found at race tracks across the
country, sponsored by his own company.
During the ISRI show he told visitors all about the
sport and customers were offered the opportunity
to have their company logo on the car. ‘People
love it and for us it’s an extra tool to pull in poten-
tial business.’
Sales of X-ray and laser hand-held analysers are
booming, confirmed Don Sackett, SciAps’ ceo.
‘You can see economic growth and companies are
investing again,’ he claimed. As for the recycling
industry, Sackett highlights ‘growing demand for
better quality output which obviously is a boost for
the advanced technology we provide.’
A closer look at world markets reveals that 40% of
SciAps’ sales is in the US, another 40% is in Asia,
and the remaining 20% is elsewhere.