Subscribe
12 A ‘goldeN Age’ of secoNd-hANd shoppiNg In a world hallmarked by consum- ers constantly craving new gad- gets, the fashion industry seems to be going in a different direction. The second-hand clothing market in the United States h...
Read the entire page 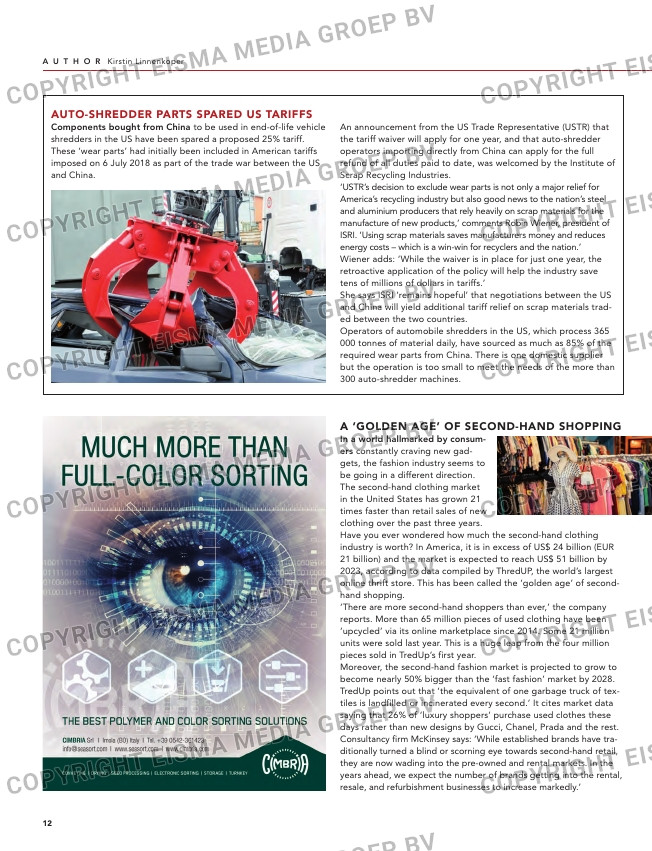 A ‘goldeN Age’ of secoNd-hANd shoppiNg
In a world hallmarked by consum-
ers constantly craving new gad-
gets, the fashion industry seems to
be going in a different direction.
The second-hand clothing market
in the United States has grown 21
times faster than retail sales of new
clothing over the past three years.
Have you ever wondered how much the second-hand clothing
industry is worth? In America, it is in excess of US$ 24 billion (EUR
21 billion) and the market is expected to reach US$ 51 billion by
2023, according to data compiled by ThredUP, the world’s largest
online thrift store. This has been called the ‘golden age’ of second-
hand shopping.
‘There are more second-hand shoppers than ever,’ the company
reports. More than 65 million pieces of used clothing have been
‘upcycled’ via its online marketplace since 2014. Some 21 million
units were sold last year. This is a huge leap from the four million
pieces sold in TredUp’s first year.
Moreover, the second-hand fashion market is projected to grow to
become nearly 50% bigger than the ‘fast fashion’ market by 2028.
TredUp points out that ‘the equivalent of one garbage truck of tex-
tiles is landfilled or incinerated every second.’ It cites market data
saying that 26% of ‘luxury shoppers’ purchase used clothes these
days rather than new designs by Gucci, Chanel, Prada and the rest.
Consultancy firm McKinsey says: ‘While established brands have tra-
ditionally turned a blind or scorning eye towards second-hand retail,
they are now wading into the pre-owned and rental markets. In the
years ahead, we expect the number of brands getting into the rental,
resale, and refurbishment businesses to increase markedly.’

Auto-shredder pArts spAred us tAriffs
Components bought from China to be used in end-of-life vehicle
shredders in the US have been spared a proposed 25% tariff.
These ‘wear parts’ had initially been included in American tariffs
imposed on 6 July 2018 as part of the trade war between the US
and China.

An announcement from the US Trade Representative (USTR) that
the tariff waiver will apply for one year, and that auto-shredder
operators importing directly from China can apply for the full
refund of all duties paid to date, was welcomed by the Institute of
Scrap Recycling Industries.
‘USTR’s decision to exclude wear parts is not only a major relief for
America’s recycling industry but also good news to the nation’s steel
and aluminium producers that rely heavily on scrap materials for the
manufacture of new products,’ comments Robin Wiener, president of
ISRI. ‘Using scrap materials saves manufacturers money and reduces
energy costs – which is a win-win for recyclers and the nation.’
Wiener adds: ‘While the waiver is in place for just one year, the
retroactive application of the policy will help the industry save
tens of millions of dollars in tariffs.’
She says ISRI ‘remains hopeful’ that negotiations between the US
and China will yield additional tariff relief on scrap materials trad-
ed between the two countries.
Operators of automobile shredders in the US, which process 365
000 tonnes of material daily, have sourced as much as 85% of the
required wear parts from China. There is one domestic supplier
but the operation is too small to meet the needs of the more than
300 auto-shredder machines.

Next phAse for coBAlt recovery from
BAtteries

Scientists at a uS uni-
versity are experiment-
ing with solvents to find
a more sustainable way
of recovering valuable
metals from discarded
batteries. ‘Deep eutec-
tic solvents’ can be used
to extract metals such
as cobalt from the metal
oxides commonly used
as cathodes in lithium-
ion batteries, reports

professor Pulickel Ajayan of Rice University’s engineering and of
chemistry department in Houston, Texas.
The solvent is made from choline chloride, a water-soluble salt used
mainly in animal feed, and ethylene glycol, typically found in anti-
freeze. It recovers more than 90% of cobalt from powdered com-
pounds and a smaller, ‘but still significant’, amount from used bat-
teries.
A deep eutectic solvent is a mixture of two or more compounds
that freezes at temperatures much lower than either of its elements.
Graduate student Kimmai Tran says: ‘As a result, you can literally
obtain a liquid from a simple combination of solids. The nice thing
about this solvent is that it can dissolve a wide variety of metal
oxides.’
During tests with lithium cobalt oxide powder, the clear solvent
yielded a wide spectrum of blue-green colours that indicated the
presence of cobalt dissolved within it. The brighter the colour, the
more cobalt has been captured, according to Tran.

The brighter the colour, the more cobalt has been