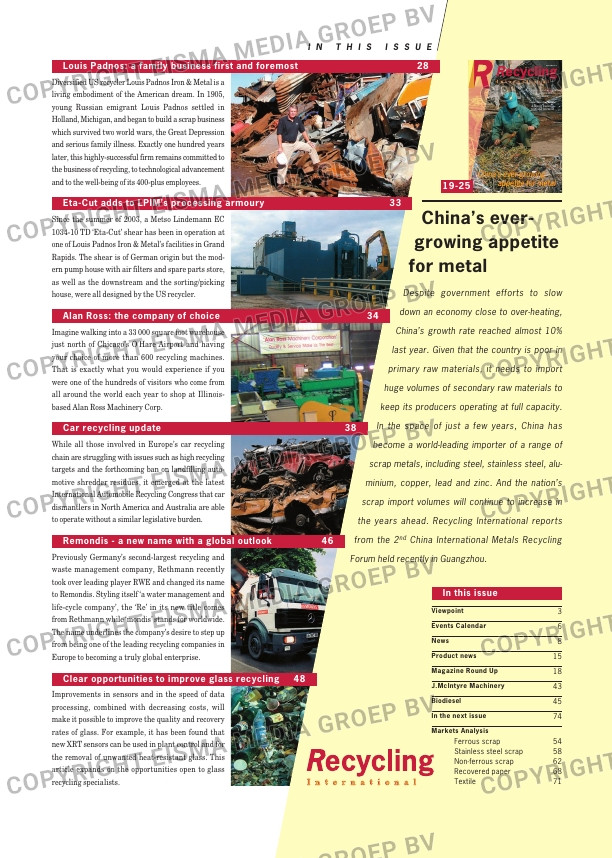 Diversified US recycler Louis Padnos Iron & Metal is a
living embodiment of the American dream. In 1905,
young Russian emigrant Louis Padnos settled in
Holland, Michigan, and began to build a scrap business
which survived two world wars, the Great Depression
and serious family illness. Exactly one hundred years
later, this highly-successful firm remains committed to
the business of recycling, to technological advancement
and to the well-being of its 400-plus employees.

Imagine walking into a 33 000 square foot warehouse
just north of Chicago’s O’Hare Airport and having
your choice of more than 600 recycling machines.
That is exactly what you would experience if you
were one of the hundreds of visitors who come from
all around the world each year to shop at Illinois-
based Alan Ross Machinery Corp.

Despite government efforts to slow

down an economy close to over-heating,

last year. Given that the country is poor in

In the space of just a few years, China has

become a world-leading importer of a range of

minium, copper, lead and zinc. And the nation’s

scrap import volumes will continue to increase in

the years ahead. Recycling International reports

Automobile recycling update
To legislate or not to

In the next issue 74

China’s ever-
growing appetite
for metal

Since the summer of 2003, a Metso Lindemann EC
1034-10 TD ‘Eta-Cut’ shear has been in operation at
one of Louis Padnos Iron & Metal’s facilities in Grand
Rapids. The shear is of German origin but the mod-
ern pump house with air filters and spare parts store,
as well as the downstream and the sorting/picking
house, were all designed by the US recycler.

Alan Ross: the company of choice 34

While all those involved in Europe’s car recycling
chain are struggling with issues such as high recycling
targets and the forthcoming ban on landfilling auto-
motive shredder residues, it emerged at the latest
International Automobile Recycling Congress that car
dismantlers in North America and Australia are able
to operate without a similar legislative burden.

Previously Germany’s second-largest recycling and
waste management company, Rethmann recently
took over leading player RWE and changed its name
to Remondis. Styling itself ‘a water management and
life-cycle company’, the ‘Re’ in its new title comes
from Rethmann while ‘mondis’ stands for worldwide.
The name underlines the company’s desire to step up
from being one of the leading recycling companies in
Europe to becoming a truly global enterprise.

Remondis – a new name with a global outlook 46

Improvements in sensors and in the speed of data
processing, combined with decreasing costs, will
make it possible to improve the quality and recovery
rates of glass. For example, it has been found that
new XRT sensors can be used in plant control and for
the removal of unwanted heat-resistant glass. This
article expands on the opportunities open to glass
recycling specialists.