Subscribe
Normally, the company will start out by trying to secure municipal waste contracts with local authori- ties. Mr Löderbusch continues: ‘Often the mayor is the driving force. If he supports an infrastructure and waste collection system, we...
Read the entire page 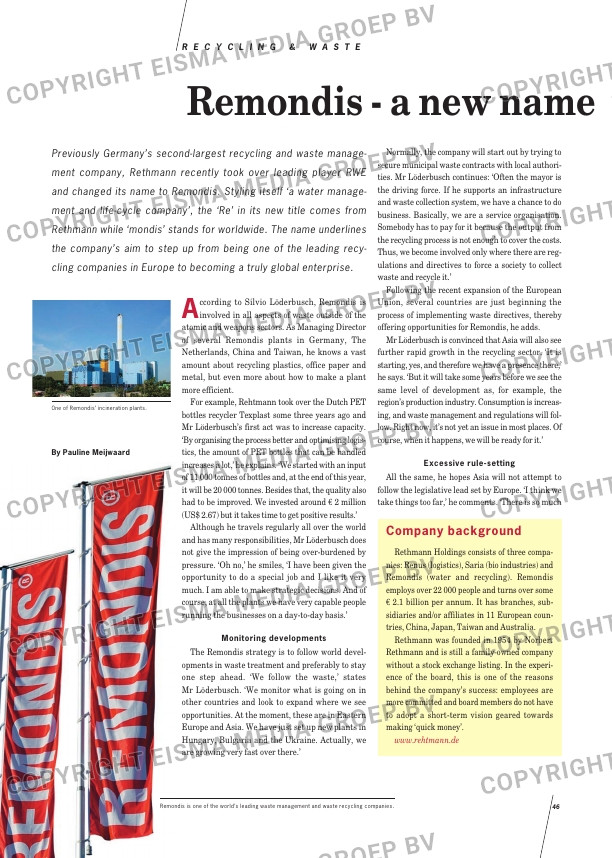 Normally, the company will start out by trying to
secure municipal waste contracts with local authori-
ties. Mr Löderbusch continues: ‘Often the mayor is
the driving force. If he supports an infrastructure
and waste collection system, we have a chance to do
business. Basically, we are a service organisation.
Somebody has to pay for it because the output from
the recycling process is not enough to cover the costs.
Thus, we become involved only where there are reg-
ulations and directives to force a society to collect
waste and recycle it.’

Following the recent expansion of the European
Union, several countries are just beginning the
process of implementing waste directives, thereby
offering opportunities for Remondis, he adds.

Mr Löderbusch is convinced that Asia will also see
further rapid growth in the recycling sector. ‘It is
starting, yes, and therefore we have a presence there,’
he says. ‘But it will take some years before we see the
same level of development as, for example, the
region’s production industry. Consumption is increas-
ing, and waste management and regulations will fol-
low. Right now, it’s not yet an issue in most places. Of
course, when it happens, we will be ready for it.’

All the same, he hopes Asia will not attempt to
follow the legislative lead set by Europe. ‘I think we
take things too far,’ he comments. ‘There is so much

and changed its name to Remondis. Styling itself ‘a water manage-

ment and life-cycle company’, the ‘Re’ in its new title comes from

cling companies in Europe to becoming a truly global enterprise.

Remondis is one of the world’s leading waste management and waste recycling companies.

A ccording to Silvio Löderbusch, Remondis isinvolved in all aspects of waste outside of the
atomic and weapons sectors. As Managing Director
of several Remondis plants in Germany, The
Netherlands, China and Taiwan, he knows a vast
amount about recycling plastics, office paper and
metal, but even more about how to make a plant
more efficient.

For example, Rehtmann took over the Dutch PET
bottles recycler Texplast some three years ago and
Mr Löderbusch’s first act was to increase capacity.
‘By organising the process better and optimising logis-
tics, the amount of PET bottles that can be handled
increases a lot,’ he explains. ‘We started with an input
of 11 000 tonnes of bottles and, at the end of this year,
it will be 20 000 tonnes. Besides that, the quality also
had to be improved. We invested around € 2 million
(US$ 2.67) but it takes time to get positive results.’

Although he travels regularly all over the world
and has many responsibilities, Mr Löderbusch does
not give the impression of being over-burdened by
pressure. ‘Oh no,’ he smiles, ‘I have been given the
opportunity to do a special job and I like it very
much. I am able to make strategic decisions. And of
course, at all the plants we have very capable people
running the businesses on a day-to-day basis.’

The Remondis strategy is to follow world devel-
opments in waste treatment and preferably to stay
one step ahead. ‘We follow the waste,’ states
Mr Löderbusch. ‘We monitor what is going on in
other countries and look to expand where we see
opportunities. At the moment, these are in Eastern
Europe and Asia. We have just set up new plants in
Hungary, Bulgaria and the Ukraine. Actually, we
are growing very fast over there.’

One of Remondis’ incineration plants.

Rethmann was founded in 1954 by Norbert
Rethmann and is still a family-owned company
without a stock exchange listing. In the experi-
ence of the board, this is one of the reasons
behind the company’s success: employees are
more committed and board members do not have
to adopt a short-term vision geared towards
making ‘quick money’.