Subscribe
‘I t’s an experience that’s unique to us - our clientswander through our facility like it’s a toy store,’ declares Rustin Ross, President of Alan Ross Machinery Corp. (ARMC) of Northbrook, Illinois, USA. And if their clients cann...
Read the entire page 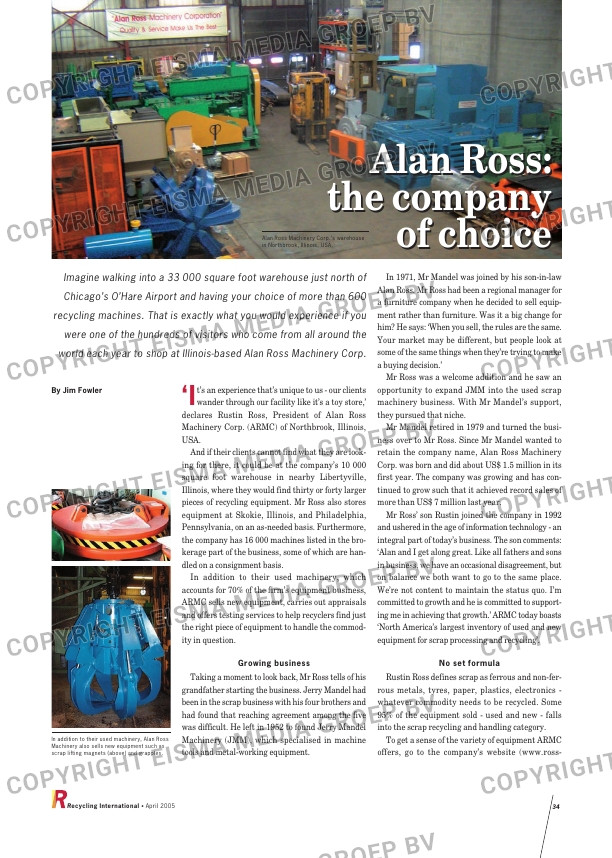 ‘I t’s an experience that’s unique to us – our clientswander through our facility like it’s a toy store,’
declares Rustin Ross, President of Alan Ross
Machinery Corp. (ARMC) of Northbrook, Illinois,
USA.

And if their clients cannot find what they are look-
ing for there, it could be at the company’s 10 000
square foot warehouse in nearby Libertyville,
Illinois, where they would find thirty or forty larger
pieces of recycling equipment. Mr Ross also stores
equipment at Skokie, Illinois, and Philadelphia,
Pennsylvania, on an as-needed basis. Furthermore,
the company has 16 000 machines listed in the bro-
kerage part of the business, some of which are han-
dled on a consignment basis.

In addition to their used machinery, which
accounts for 70% of the firm’s equipment business,
ARMC sells new equipment, carries out appraisals
and offers testing services to help recyclers find just
the right piece of equipment to handle the commod-
ity in question.

Taking a moment to look back, Mr Ross tells of his
grandfather starting the business. Jerry Mandel had
been in the scrap business with his four brothers and
had found that reaching agreement among the five
was difficult. He left in 1952 to found Jerry Mandel
Machinery (JMM), which specialised in machine
tools and metal-working equipment.

In 1971, Mr Mandel was joined by his son-in-law
Alan Ross. Mr Ross had been a regional manager for
a furniture company when he decided to sell equip-
ment rather than furniture. Was it a big change for
him? He says: ‘When you sell, the rules are the same.
Your market may be different, but people look at
some of the same things when they’re trying to make
a buying decision.’

Mr Ross was a welcome addition and he saw an
opportunity to expand JMM into the used scrap
machinery business. With Mr Mandel’s support,
they pursued that niche.

Mr Mandel retired in 1979 and turned the busi-
ness over to Mr Ross. Since Mr Mandel wanted to
retain the company name, Alan Ross Machinery
Corp. was born and did about US$ 1.5 million in its
first year. The company was growing and has con-
tinued to grow such that it achieved record sales of
more than US$ 7 million last year.

Mr Ross’ son Rustin joined the company in 1992
and ushered in the age of information technology – an
integral part of today’s business. The son comments:
‘Alan and I get along great. Like all fathers and sons
in business, we have an occasional disagreement, but
on balance we both want to go to the same place.
We’re not content to maintain the status quo. I’m
committed to growth and he is committed to support-
ing me in achieving that growth.’ ARMC today boasts
‘North America’s largest inventory of used and new
equipment for scrap processing and recycling’.

Rustin Ross defines scrap as ferrous and non-fer-
rous metals, tyres, paper, plastics, electronics –
whatever commodity needs to be recycled. Some
95% of the equipment sold – used and new – falls
into the scrap recycling and handling category.

To get a sense of the variety of equipment ARMC
offers, go to the company’s website (www.ross-

recycling machines. That is exactly what you would experience if you

In addition to their used machinery, Alan Ross
Machinery also sells new equipment such as
scrap lifting magnets (above) and grapples.