Subscribe
million tonnes, leaving a ‘gap’ of some 12-15 million tonnes which should be covered by imports. Mr Wu warned that, although steel scrap imports would continue to grow, quality inspection controls would become stricter. Furthermore, h...
Read the entire page 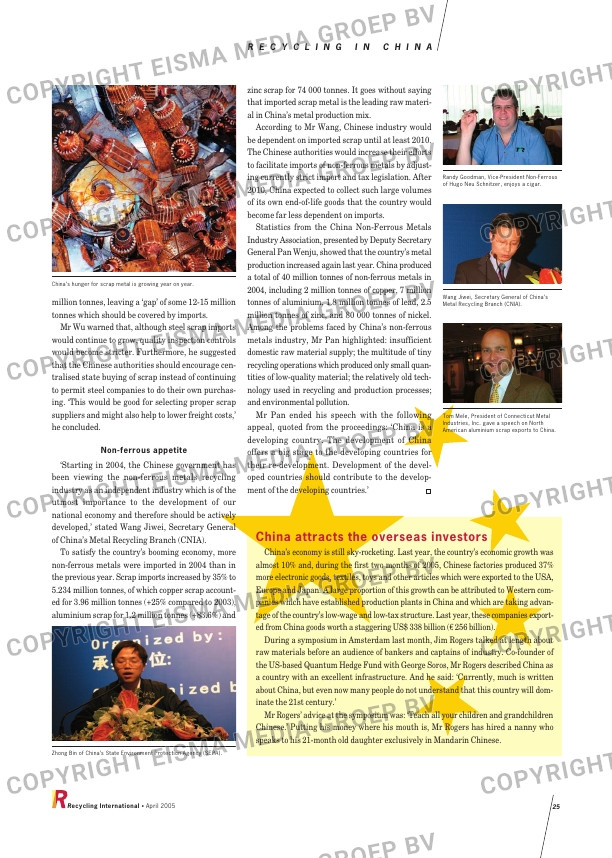 million tonnes, leaving a ‘gap’ of some 12-15 million
tonnes which should be covered by imports.

Mr Wu warned that, although steel scrap imports
would continue to grow, quality inspection controls
would become stricter. Furthermore, he suggested
that the Chinese authorities should encourage cen-
tralised state buying of scrap instead of continuing
to permit steel companies to do their own purchas-
ing. ‘This would be good for selecting proper scrap
suppliers and might also help to lower freight costs,’
he concluded.

‘Starting in 2004, the Chinese government has
been viewing the non-ferrous metals recycling
industry as an independent industry which is of the
utmost importance to the development of our
national economy and therefore should be actively
developed,’ stated Wang Jiwei, Secretary General
of China’s Metal Recycling Branch (CNIA).

zinc scrap for 74 000 tonnes. It goes without saying
that imported scrap metal is the leading raw materi-
al in China’s metal production mix.

According to Mr Wang, Chinese industry would
be dependent on imported scrap until at least 2010.
The Chinese authorities would increase their efforts
to facilitate imports of non-ferrous metals by adjust-
ing currently strict import and tax legislation. After
2010, China expected to collect such large volumes
of its own end-of-life goods that the country would
become far less dependent on imports.

China’s hunger for scrap metal is growing year on year.

almost 10% and, during the first two months of 2005, Chinese factories produced 37%
more electronic goods, textiles, toys and other articles which were exported to the USA,
Europe and Japan. A large proportion of this growth can be attributed to Western com-
panies which have established production plants in China and which are taking advan-
tage of the country’s low-wage and low-tax structure. Last year, these companies export-
ed from China goods worth a staggering US$ 338 billion (€ 256 billion).

During a symposium in Amsterdam last month, Jim Rogers talked at length about
raw materials before an audience of bankers and captains of industry. Co-founder of
the US-based Quantum Hedge Fund with George Soros, Mr Rogers described China as
a country with an excellent infrastructure. And he said: ‘Currently, much is written
about China, but even now many people do not understand that this country will dom-
inate the 21st century.’

Mr Rogers’ advice at the symposium was: ‘Teach all your children and grandchildren
Chinese.’ Putting his money where his mouth is, Mr Rogers has hired a nanny who
speaks to his 21-month old daughter exclusively in Mandarin Chinese.