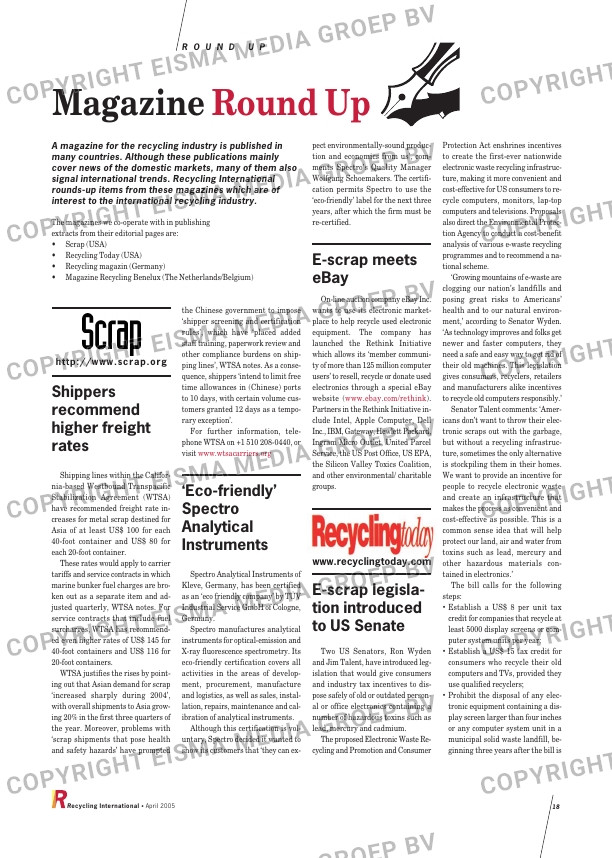 Shipping lines within the Califor-
nia-based Westbound Transpacific
Stabilization Agreement (WTSA)
have recommended freight rate in-
creases for metal scrap destined for
Asia of at least US$ 100 for each
40-foot container and US$ 80 for
each 20-foot container.

WTSA justifies the rises by point-
ing out that Asian demand for scrap
‘increased sharply during 2004’,
with overall shipments to Asia grow-
ing 20% in the first three quarters of
the year. Moreover, problems with
‘scrap shipments that pose health
and safety hazards’ have prompted

the Chinese government to impose
‘shipper screening and certification
rules’, which have ‘placed added
staff training, paperwork review and
other compliance burdens on ship-
ping lines’, WTSA notes. As a conse-
quence, shippers ‘intend to limit free
time allowances in (Chinese) ports
to 10 days, with certain volume cus-
tomers granted 12 days as a tempo-
rary exception’.

Spectro Analytical Instruments of
Kleve, Germany, has been certified
as an ‘eco friendly company’ by TÜV
Industrial Service GmbH of Cologne,
Germany.

Spectro manufactures analytical
instruments for optical-emission and
X-ray fluorescence spectrometry. Its
eco-friendly certification covers all
activities in the areas of develop-
ment, procurement, manufacture
and logistics, as well as sales, instal-
lation, repairs, maintenance and cal-
ibration of analytical instruments.

Although this certification is vol-
untary, Spectro decided it wanted to
show its customers that ‘they can ex-

pect environmentally-sound produc-
tion and economics from us’, com-
ments Spectro’s Quality Manager
Wolfgang Schoemakers. The certifi-
cation permits Spectro to use the
‘eco-friendly’ label for the next three
years, after which the firm must be
re-certified.

Two US Senators, Ron Wyden
and Jim Talent, have introduced leg-
islation that would give consumers
and industry tax incentives to dis-
pose safely of old or outdated person-
al or office electronics containing a
number of hazardous toxins such as
lead, mercury and cadmium.

The proposed Electronic Waste Re-
cycling and Promotion and Consumer

‘Growing mountains of e-waste are
clogging our nation’s landfills and
posing great risks to Americans’
health and to our natural environ-
ment,’ according to Senator Wyden.
‘As technology improves and folks get
newer and faster computers, they
need a safe and easy way to get rid of
their old machines. This legislation
gives consumers, recyclers, retailers
and manufacturers alike incentives
to recycle old computers responsibly.’

Senator Talent comments: ‘Amer-
icans don’t want to throw their elec-
tronic scraps out with the garbage,
but without a recycling infrastruc-
ture, sometimes the only alternative
is stockpiling them in their homes.
We want to provide an incentive for
people to recycle electronic waste
and create an infrastructure that
makes the process as convenient and
cost-effective as possible. This is a
common sense idea that will help
protect our land, air and water from
toxins such as lead, mercury and
other hazardous materials con-
tained in electronics.’

The bill calls for the following
steps:
• Establish a US$ 8 per unit tax

credit for companies that recycle at
least 5000 display screens or com-
puter system units per year;

• Establish a US$ 15 tax credit for
consumers who recycle their old
computers and TVs, provided they
use qualified recyclers;

• Prohibit the disposal of any elec-
tronic equipment containing a dis-
play screen larger than four inches
or any computer system unit in a
municipal solid waste landfill, be-
ginning three years after the bill is