Italy – The Costa Concordia cruise vessel will be floated off the seabed near the Italian island of Giglio in June to be towed away and scrapped. But it has yet to be decided where the ship, which is some two-and-a-half times the size of the Titanic, will be dismantled, reports Engineering & Technology magazine.

The Costa Concordia capsized two years ago after hitting rocks, with the loss of 32 lives. According to Franco Gabrielli, the man tasked by the Italian government with overseeing the salvage operation, around 12 companies are expected to bid for the dismantling contract.

This is expected to be the most expensive wreck recovery ever at a cost of more than Euro 600 million (US$ 813 million). It is said that few ports in Europe have the necessary depth of at least 20 metres to accommodate the vessel.

The recovery of the Costa Concordia will be a ‘delicate and complex’ operation. Some 30 huge air-filled tanks will lift the 114 500-tonne vessel from where it has lain since being hauled upright. In April, teams will begin to fit 19 buoyancy tanks to the side of the ship, adding to the 11 already in place.

Once the tanks have been fitted and the weather is good, the Concordia will be refloated. The plan is to pump air into the tanks and water out at the start of June; it will take seven to 10 days to lift the ship from the seabed and prepare it for towing. 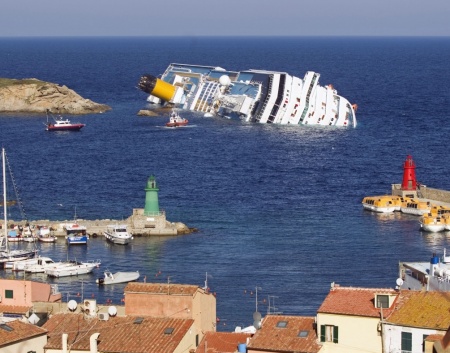