United States – What do you get when you take six obsolete hard drives, a cut-up keyboard number pad and plenty of curiosity? A futuristic-looking device that’s something between a guitar and a synthesizer. The beauty of e-scrap, says experimental musician Colten Jackson, is that basically any electrical or electronic appliance can be used to produce music.

′Whatever you start with, whether it′s garbage or e-waste, it lends itself to something,′ Jackson notes. The youth from the US state of Illinois is the founder of a new project called Electronic Waste Orchestra, which encourages kids to tinker with discarded objects and transform them into instruments.

Jackson explains that the spinning disc in a hard disk produces sound waves. The subsequent noise, which sounds like an electronic version of handling crystal glasses, can be transmitted fairly easily using sound-generating software. In the case of his ′Hard Rock Guitar′, Jackson has programmed the software so each key on the keyboard represents a certain musical note.

According to Jackson, the Electronic Waste Orchestra is more about ′a new approach to designing music′ than inspiring people to recycle their own discarded devices. 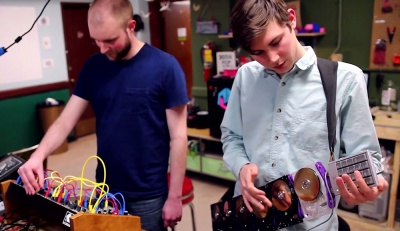