The Netherlands – The holiday season has been given a sustainable touch in the Netherlands where Sinterklaas, the older ‘brother’ of Santa Claus, has designated one of his helpers to serve as Groene Piet (Green Peter). The idea, which came from Dutch recycling service Wecycle, saw old toys and small electronic devices being collected by the Pieten crew at locations countrywide.

In addition to carrying a straw sack filled with the usual treats and cookies, Groene Piet was called on to supervise the new Dutch e-scrap take-back initiative. ′We gave the people the opportunity to hand in their unwanted devices, such as toys,′ Wecycle notes.

Although the national recycling authority collects approximately 400 tonnes of such toys every year, an estimated 1300 tonnes is simply discarded. Digital cameras, gaming consoles and MP3 players have climbed the wish-lists of both children and grown-ups in recent years. A recent survey showed that one out of every three gifts is an electrical/electronic device of some kind while one in five presents is a luxury household device like a new coffee machine.

Wecycle is hoping the collaboration with Sinterklaas will make people understand that toys are too easily thrown away – a ′great pity′ because the organisation is typically able to recycle 80-90% of the e-scrap collected.

Groene Piet was also seen handing out green soccer balls to parents and children in a bid to boost the popularity of classic non-battery or electronically-powered toys. 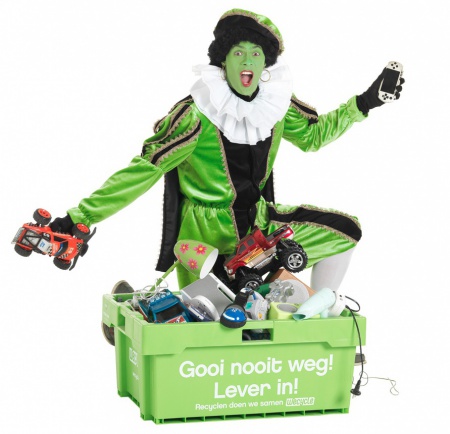