Africa – Governments and authorities in East Africa need to enforce standards for environmentally-sound lead-acid battery recycling that are in line with human health principles. This appeal has come from several African environmental organisations ahead of next week’s United Nations Environment Assembly meeting in Nairobi, Kenya, which will be focusing on, among other topics, health and environmental hazards caused by the recovery of lead from waste batteries.

In sub-Saharan countries in particular, ‘unsound’ recycling practices are said to cause severe and even fatal lead poisoning among people working in and living around small and industrial-scale lead smelters, including children. This is just one of the findings of the broad co-operation project initiated by Germany’s Oeko-Institut that involved African environmental organisations in Cameroon, Ethiopia, Kenya and Tanzania.

Experts found that industrial recycling operations ‘often involve rudimentary techniques and lack workplace safety precautions’. The team compiled country-level information on smelters and recycling practices in order to raise awareness of the issues among policy-makers. Its conclusion is that governments and supervisory authorities need to take strong steps to enforce standards for environmentally-sound lead-acid battery recycling that are in line with human health principles.

‘The rules should not be defined anew for each individual country,’ stresses Tadesse Amera, director of PAN-Ethiopia. ‘It would rather make sense if such standards were applied globally. International organisations such as the United Nations Environment Programme have a major role to play here.’

In most African countries, workers and those living around lead smelters are generally not aware of the extreme health risks posed by such facilities because lead poisoning symptoms are usually thought to be signs of an infectious disease. ‘That is why the true causes of high rates of disease often remain concealed,’ comments Diana Mathai of Kenya’s Center for Justice, Governance and Environmental Action.

According to Mathai, positive action occurred only when they started to educate the affected communities about the risks and built the capacity of state and non-state actors on lead poisoning. ‘Seventeen battery recyclers in Kenya have been closed since then,’ she says. ‘This is an important first step, but we are still struggling with many contaminated sites and unregulated battery recycling.’

At the same time, the experts see further health risks to even larger sections of the population that have scarcely gained any attention so far because some of the contaminated materials extracted from battery recycling processes are used to manufacture consumer products such as water tanks or chairs.

‘In Cameroon, some of the lead is even mixed with aluminium to make artisanal cooking pots,’ notes Gilbert Kuepouo of Cameroon’s Research and Education Centre for Development. ‘So we must assume that large parts of the population ingest a certain daily dose of the heavy metal.’

More than 800 000 tonnes of lead from discarded batteries is said to arise in Africa every year. Usually, there is no industrial application for the heavy metal locally so most is exported – mainly to smelters in Europe and Asia which then supply car battery manufacturers.

According to Andreas Manhart, senior researcher at the Oeko-Institut, the big buyers of lead – ‘including Europe’s automobile industry’ – should assume responsibility for their supply chain. ‘Some are already doing this, but mostly just by making demands upon their direct suppliers,’ he says. ‘The first links in the chain are largely ignored.’ 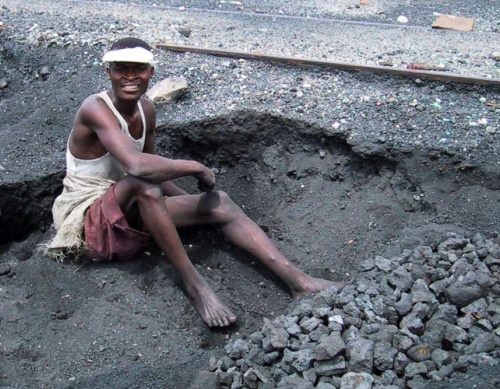