United States – Solid waste collection workers continued to have the fifth deadliest job in the USA last year, according to the Bureau of Labor Statistics. The 2016 National Census of Fatal Occupational Injuries shows that the rate of fatalities among waste collection workers decreased by more than 10% but that its ranking among the country’s deadliest occupations remained changed.

In 2016, 31 collection workers were killed on the job versus 36 in the previous year. David Biderman, executive director and ceo of the Solid Waste Association of North America (SWANA), calls it ‘the sad truth’ that waste collection is still the fifth most dangerous job in America, with a higher workplace fatality rate than police officers or fire fighters.

‘This is no time to take a victory lap,’ he says. Nine fatalities were reported among America’s solid waste landfill employees in 2016, which representated a decline from a high of 11 in 2015.

During the three years prior to that, however, landfills recorded only three fatalities per year, and so the current numbers remain at a historically high level. Fatality data for US material recovery facility (MRF) workers in 2016 show one reported on-the-job death, although the overall data for this sector did not meet publication criteria and therefore no total was listed.

In 2015, three fatalities occurred among MRF workers. Though data for 2017 will not be available until late 2018, SWANA has recorded more than 100 fatal incidents involving the waste sector in the USA ‘with 30 waste workers and 70 third parties killed this year’. 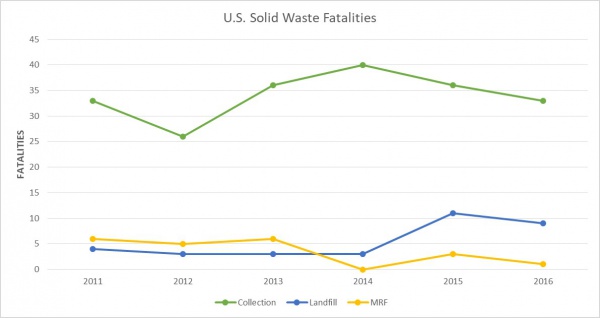 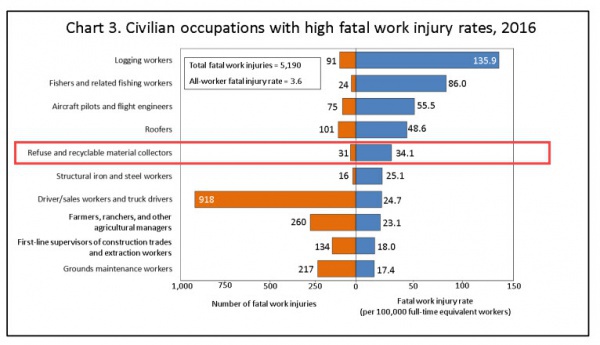