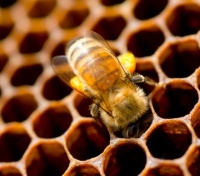 More than 200 of these hives have been found throughout the Canadian city of Toronto, with plastics replacing on average 23% of natural material in each cell. The plastics collected by each species closely resemble the natural materials usually sought by them; in effect, tree resins and cut plant and flower leaves have made way for polyurethane-based sealant and torn-up grocery bags.

Nevertheless, both species have produced healthy offspring in the ‘plastic’ nests. ‘Although perhaps incidentally collected, the novel use of plastics in the nests of bees could reflect ecologically adaptive traits necessary for survival in an increasingly human-dominated environment,’ MacIvor argues.

Considering the vast amount of non-biodegradable plastic being dumped on a daily basis, the bees’ surprising adoption of recycling practices could well become ‘increasingly important’.