The Netherlands – Following a string of lethal accidents involving electric cars in the US as well as Europe, Dutch battery recycling expert Johan van Peperzeel has voiced the need to find a solution to this ‘alarming’ safety issue. With the help of the local fire department, he organised a test at his facility in Lelystad to demonstrate the F-500 fire extinguisher, which is said may put a stop to the flames ‘before it is too late’.

‘This summer, the Netherlands witnessed its first lethal e-car accident when a Tesla vehicle crashed against a tree in Baarn at over 155k/m per hour,’ Van Peperzeel noted. The impact caused a big fire that the fire brigade spent a good thirty minutes putting out, after which a technical ‘clean-up crew’ from Van Peperzeel was especially dispatched to safely handle the car battery to eliminate the chances of electrocution.

‘Time and again, we hear people say how they wish there was an easy solution for fighting car battery fires. Something that works immediately and prevents the battery from re-igniting,’ the Dutch entrepreneur told Recycling International during the yesterday’s demonstration. ‘That is why we are showcasing this solution, the F-500 fire extinguisher, developed by Tyco. Because it is the answer we have all been waiting for,’ he explained.

Besides being suitable for treating lithium-ion fires, Van Peperzeel’s test proved the F-500 substance is also an effective means to douse a fire when the source material is e-scrap, plastics, light metals or tyres. ‘All the flames require is a few short bursts of the liquid from various angles, and that’s it,’ the battery specialist stated. 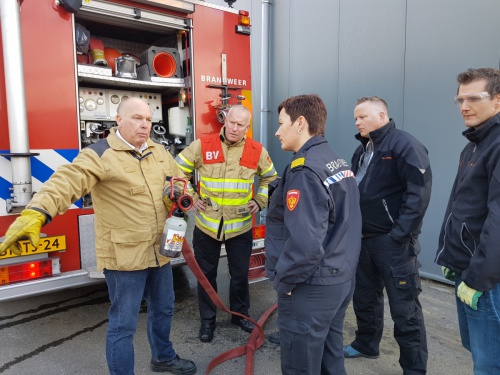 The F-500 basically creates a layer around the material itself and becomes ‘extremely cool’ within an instant. ‘Look, just a couple of seconds after spraying, you can safely touch the material,’ Van Peperzeel said, with a nod to the fire marshal who picked up the previously burning plastic flakes and passed them around for inspection.

Van Peperzeel himself plans to have his battery sorting stations fitted with customised F-500 sprinklers to ensure ‘optimum safety’. Already, the regular water extinguishers have been replaced with F-500 units all around his facility. This would not be a luxury since his crew deals with igniting batteries at least once a month.

Hildemarie Schippers, team leader of Flevoland Fire Department’s risk management unit, says she could envision equipping the existing fleet with F-500 fire extinguishers. ‘It’s not that we know how to handle e-car fires, but we end up wasting up to 70 litres of water every time,’ she commented. ‘This seems like a much more sustainable way of getting the situation under control.’

She was particularly pleased to hear that adding F-500 to the water hose would increase the total surface reach by a factor of ten, while free radicals and smoke are nearly completely suppressed. What’s more, the substance will disappear within thirty days and not cause any harm to the environment. 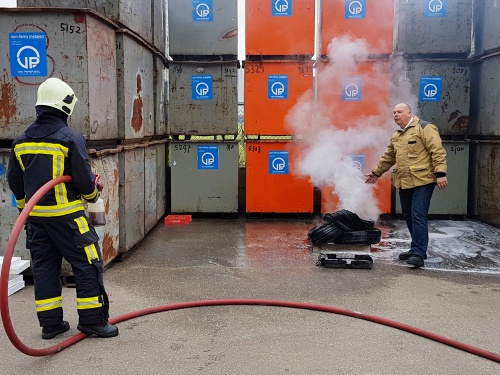 After the fires have died down, Van Peperzeel announced he is eager to announce ‘innovative configurations for a comprehensive F-500 system’ especially developed for the recycling sector at the upcoming Electronics & Cars Recycling Conference in Macau. The event will take place on 15 November.

Further tests will be executed by Van Peperzeel later this month inside trucks and sea containers to explore the best possible set-up for such a F-500 system both on-site and during transit.