United States – Electric car manufacturer Tesla Motors plans to build a lithium-ion battery factory that will likely be the biggest in the world, according to ceo Elon Musk. 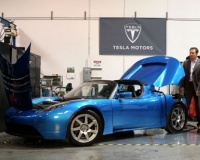 ‘This will be a giant facility,’ he told analysts during a quarterly business meeting. ‘We are talking about something that is comparable to all of the lithium-ion battery production in the world – in one factory.’ The new plant will utilise solar power and develop a recycling programme to reuse old batteries.

It has been extremely difficult to secure sufficient lithium-ion battery cells of late, says the car maker. To remedy this lack of supply, it has struck a deal with Panasonic to buy ‘three times more cells’ than under an earlier contract. Tesla plans to obtain roughly 2 billion cells from the Japanese company over a four-year period.

‘We are extremely proud to be a strategic partner of Tesla,’ noted Yoshihiko Yamada, president of Panasonic’s Automotive & Industrial Systems Company. ‘Panasonic will increase its production capacity of lithium-ion battery cells to supply Tesla’s growing needs as it expands its production of electric vehicles.’